« Young Crusaders Step Up to the Challenge in Ukiah Scrimmage

Best Players in the Little 4 Ready to Blossom as Seniors

Photos by Ray Hamill/HumboldtSports.com – Ferndale’s Landon Gomes could be the best all-around player in the Little 4 this season.

Get ready for some Little 4 fireworks in 2019, and some top quality football along the way.

Last season, in a championship race that went down to the wire, many of the best players in the conference were just juniors, and with all of them back this fall as seniors, the competition should be even better.

All four teams featured top junior talent in 2018, players like Carlos Aguilar and John Smith in Hoopa, Kien Mazzotti and Max Rice at Arcata, Landon Gomes in Ferndale, and Tom Locatelli, Kyler Carr and Caleb Martinez at McKinleyville, among others.

All of them were among their team’s top performers a year ago, and all are back in 2019, a year older and wiser and ready to go.

Arcata’s Max Rice is expected to dominate along the line this fall.

“I think it’s a very competitive league,” McKinleyville head coach Keoki Burbank said. “I felt as a whole that the top players in the league last year were juniors. Players like Hoopa’s John Smith and Carlos Aguilar and Arcata’s Mazzotti and Max Rice.

“Our top lineman, top rusher and top tackler were all juniors last year, and Landon Gomes may be the best all-around player in our league.

“It’s going to be really competitive, and the team that continues to grow each week and has the fewest injuries is probably going to be out front.”

All four teams can make a legitimate argument why they could win it all, although the defending champion Arcata Tigers will kick off the season as favorites, a tag they’re not shying away from with ambitions of quickly returning to the Big 5, a conference they played in until last season.

Hoopa provided the biggest challenge a year ago, finishing 4-2, just one win behind the 5-1 Tigers.

Whether the Warriors can take that next step and de-throne the champions is one of the biggest questions heading into the new campaign, while both Ferndale and McKinleyville will feel they have a shot as long as they stay healthy and focused.

Unlike the Big 4, the Little 4 features home and away games against all three opponents, with the action getting under way in late September and running for six weeks. 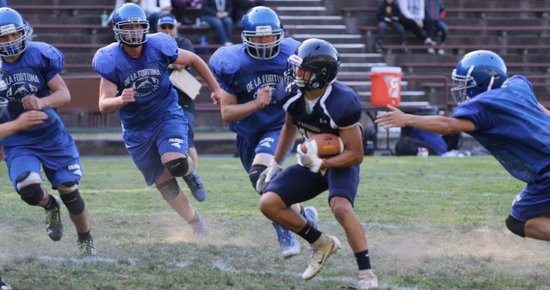 Young Crusaders Step Up to the Challenge in Ukiah Scrimmage