A big fourth quarter lifted the Tigers to a 59-52 non-conference basketball win over Hoopa Valley at Arcata High on Monday.

The home team trailed by four points heading into the final period, but outscored the visitors 16-5 for the quarter to pull out the win and end a four-game losing skid.

“I was pleased that we’re getting better offensively, and down the stretch we really moved the ball well and got ourselves some pretty good looks,” Arcata head coach Doug Oliveira said.

Sophia Belton led the Arcata girls with 16 points, while Kali Zanotti finished with 13 and the in-form Jocelyn Bliven with 10.

Alexia Jackson continued her impressive season with a game-high 18 points for the Warriors.

The Warriors started the stronger of the two teams, leading by four points after the opening quarter and by two at halftime.

“The Hoopa kids played really well,” Oliveira said. “Alexia Jackson, for most of the game she kind of dominated with her penetration and making things happen.”

Anna Williams added eight points for the Tigers, who improved to 8-11, while Raja Cohen finished with seven. 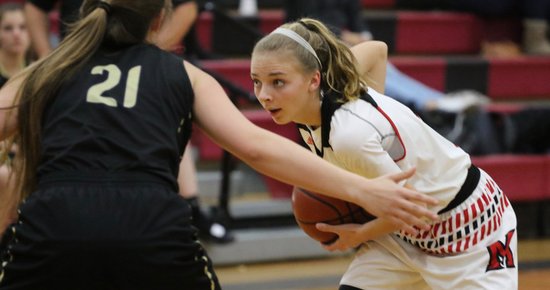