The Humboldt Eagles are right where they need to be as they get set for a state championship bid that gets under way at the Northern California Area One Tournament in Woodland on Thursday.

Driven by last year’s shortcomings at the same stage of the season, the 19U American Legion county all-star team has rarely been short of exceptional this summer, with all eyes focused on reaching the state tournament in Yountville since day one.

In particular, the four collegiate freshmen on the team had plenty of opportunities to play elsewhere, but choose to come home instead to pursue their collective goal.

“There are some kids on this team that came back from college, and they came back specifically with the purpose of making state this year,” head coach Matt Tomlin said. “They felt like they have unfinished business. This year, they’re on a mission to get to state.”

Garrison Finck pitched the opening two innings against the Crabs.

That, of course, doesn’t guarantee anything, and a couple of bad games at the wrong time could quickly end their season and dash their hopes as suddenly as last summer.

They open the double-elimination tournament against Napa on Thursday afternoon, with the top four of eight teams advancing to the state finals in Yountville next week.

And judging by what the Eagles have achieved so far this year, and in particular the way they’ve been playing recently, this is a confident group that appears well equipped to challenge anyone for a state title.

They certainly have the pitching depth, with several go-to arms, while the bats have been swinging with confidence in the later stages of the season, including Tuesday’s impressive send-off against the Humboldt Crabs.

The Eagles lost the game 5-0, but acquitted themselves extremely well against the top-collegiate talent on the Crabs roster, and looked anything but out of their depth in front of a packed house at the Arcata Ball Park.

It was the final time we’ll get to see this special group of players playing together on the North Coast, and it was a fitting send-off.

“It was just a spectacular night for everybody involved in the game,” Tomlin said, adding that the Crabs are “the complete professional organization” in everything they do.

The Eagles’ pitching kept them in the game throughout, as Tomlin utilized seven different arms, with eyes on giving as many players as possible the opportunity to pitch on such a big occasion, as well as getting them ready and keeping them fresh for the big five-day NorCal tournament.

“We accomplished what we wanted as far as getting all our pitchers on the mound, either against the B52s on Monday or the Crabs on Tuesday,” Tomlin said. “Everybody’s ready to go for the tournament.”

But while the team’s stellar pitching is no secret, the Eagles’ presence at the plate on Tuesday was perhaps the biggest surprise of all, as they came out confident, getting runners on base in each of the opening seven innings, including loading the bases in the sixth.

“We had guys taking good swings,” Tomlin said. “We had our chances, and I just couldn’t be happier with the way we played.”

In particular, Gannon Cyphers and Hunter Davis have been hitting with a lot of confidence.

Cyphers is batting over .400 for the summer, while Davis, who was 2-for-4 against the top-class Crabs pitching, is batting .376.

Other players have been contributing too, players like Landon Gomes, who went on a late-season tear at the plate, and the ever-reliable Kalebh Hill, who blasted his first ever home run last weekend, hitting a grand slam for good measure.

“This is a team that’s playing with a lot of confidence,” Tomlin said.

Young sensation Nick Dugan, who continues to pile up Division-I scholarship offers after his freshman high school campaign, will get the start on the mound against Napa, with Cameron Saso and Garrison Finck ready from the bullpen, which is not a bad back-up option to call on.

If they can get the better of Napa, the 32-11 Eagles will play either Siskiyou or Petaluma on Friday. 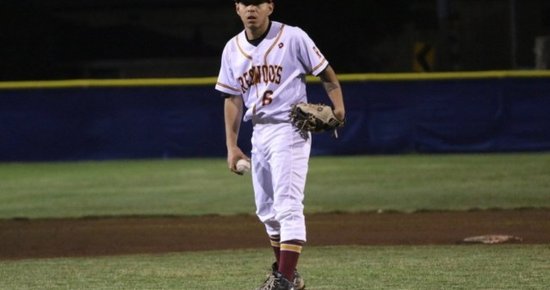