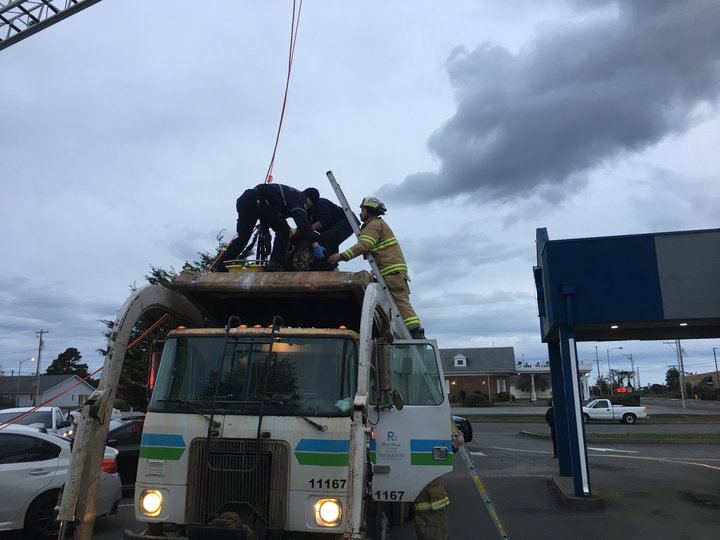 Photos of the incident provided by Crescent City Fire and Rescue.

On Tuesday, March 5, 2019 at 6:34 AM Crescent City Fire & Rescue responded to a reported extrication of a subject from the rear compartment of a refuse collection truck. Fire and Crescent City Police units arrived on scene to find a male victim laying on top of the truck above the cab. The victim had been accidentally dumped into the rear trash compartment of the truck when the dumpster he was occupying was emptied into the truck a few minutes before. This had occurred at another location but was not witnessed, and the truck continued on its route. The victim had managed to climb back out of the rear trash compartment onto a metal plate above the cab. The operator saw or heard the victim when he stopped to open a garbage enclosure to retrieve another dumpster at 560 L Street. The driver notified emergency response crews.

Fire and ambulance personnel accessed the top of the truck and confirmed that nobody else was visible in the trash compartment. The top cover of the truck body was then closed, allowing access to the victim. The victim was assessed and found to have suffered several injuries.

Fire personnel utilized rope rescue skills and suspended a Stokes rescue basket under the large ladder on the ladder truck. The basket was lifted to the top of the refuse truck, and the victim loaded. The victim was transferred back to the ground and transported via Del Norte Ambulance to Sutter Coast Hospital for treatment of various injuries.

It is unknown if the victim was sleeping in the dumpster at the time it was emptied or was inside the dumpster for some other reason. This incident could have been tragic had the victim lost consciousness in the rear of the refuse truck or not been able to get back on top of the cab, as he would have been compacted into the load of trash and died. Dumpsters are not designed for human habitation and should not be occupied for any reason.