The Tigers have waited a long time to return to the North Coast Section playoffs, and they didn’t waste the opportunity.

On Friday evening, they defeated visiting Berean Christian 9-4 in the Division-IV bracket, and the Arcata performance featured a little bit of everything.

From some inspirational senior leadership shown at the plate, to some outstanding defense by a young outfield, to another strong showing by junior Makayla Bernald in the pitcher’s circle, the No. 6 seeds beat the No. 11 Eagles in just about every aspect of the game.

And the most impressive part of it all for head coach Teresa Stavert?

“Just the team effort,” she said. “And they’re enjoying it. They play with all their heart.”

The Tigers also showed plenty of character in the win, rallying from an early three-run deficit with nine unanswered runs.

“The team could have gotten down and scared after going down 0-3 in the first, but they pulled together and chipped away,” Stavert said.

The seniors led the way at the plate, with all four combining for eight hits.

Claire Broadman finished 3-for-4 with two doubles and an RBI, while Maria Moorehouse was 2-for-3 with a pair of RBIs.

The players listen to their coaches after Friday’s win.

Claire Monge also had a pair of hits, including a huge two-out double on an 0-2 pitch in the third to drive home two runs and put the Tigers up 6-3.

They proved to be the winning runs.

Kori McCracken added a hit and an RBI and also had an outstanding day behind the plate.

The senior catcher threw out a Berean Christian runner at third in the fourth inning on a pivotal play with the visitors threatening to tie the game.

Arcata’s Claire Broadman reacts after hitting one of her two doubles on Friday.

The Tigers got out of another jam in the top of the fourth, thanks to some strong defense, this time on a spectacular catch by right fielder Lola Renteria, who continues to grow as a solid defensive option.

Renteria followed that with another inning-ending play in the fifth, this time on a diving catch.

“The outfield was outstanding,” Stavert said. “Lola’s catches in right field were phenomenal.”

Left fielder Zoe Leonard also made a big catch in the fifth, as the Tigers began to exert control of the game on both sides of the ball, while Monge was just as effective at third base, where she also made some outstanding plays.

Senior catcher Kori McCracken celebrates with her teammates on Friday.

Perhaps most impressive of all was the pitching, with Bernald dominating in the circle for the 17-9 Tigers, who are enjoying their best campaign in over a decade.

“I’m so proud of her,” Stavert said. “She’s been working extra at home on top of our practice times. She earned this win today.”

The No. 6 Tigers will now play at No. 2 Cardinal Newman in the Division-IV quarterfinals, in a game that is expected to be scheduled for Monday.

A win over at Cardinal Newman might set up a semifinal showdown against Big 5 champion McKinleyville, if the No. 2 Panthers can also win their quarterfinal at home to No. 10 Kennedy. 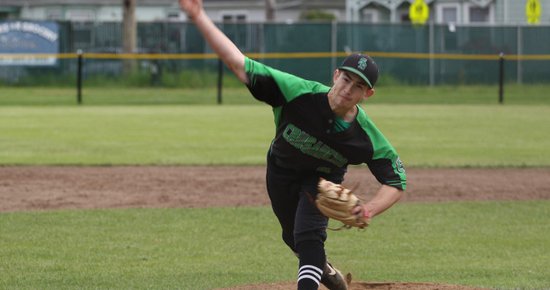 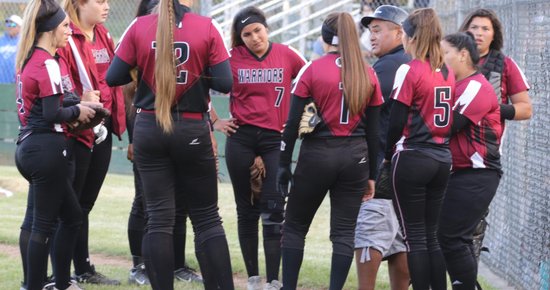