GROWING OLD UNGRACEFULLY: Someone Left Their Grammar at Home »

The ever-consistent Perez-Estrada nailed his attempt late in the third quarter to break a 28-28 deadlock, and thanks to some stellar defense and special teams, that kick would prove to be the difference in a tight game.

“We battled it out,” St. Bernard’s head coach Matt Tomlin said. “I’m very proud of my team. We beat a very good football team. We played some great team football, and we had some outstanding individual performances.”

None more so Eli Moon, who recovered two third-quarter onside kicks to give the Crusaders some much needed momentum at a crucial spell of the game.

Demarte Prudhomme also had a big night, breaking free for a 68-yard TD reception from quarterback Will Omey to give his team a two-TD lead late in the first half.

Omey also stepped up big at safety, as the Crusaders had to dig deep defensively late in the game on the way to ending two of the Eagles’ three second-half drives on takeaways.

The Kennedy offense was driving late in the game when Omey stripped the ball to force a turnover.

The Crusaders were unable to do much with the ensuing possession, and the Eagles were driving again in the final two minutes only to be denied by a game-clinching Lane Thrap interception.

“Our superstar this year, Lane Thrap, came up with a play when we needed it,” Tomlin said. “He’s just been special for us all year.”

The Crusaders had the better of exchanges in the first half, or at least for most of it.

Justin Hagler capped their opening drive with a 10-yard scoring run, and added a second TD later in the half on an eight-yard run.

After Omey and Prudhomme combined for their 68-yard TD, it appeared as if St. Bernard’s was taking control of the game.

A disastrous final minute of the second quarter, however, resulted in a pair of Eagles touchdowns to leave both teams tied going into the interval, including one that came on a pick six.

But if the momentum appeared to have switched hands at the break, especially with Kennedy due to receive the opening kickoff of the second half, the Crusaders immediately grabbed it back again when Moon recovered an onside kick.

The SB offense took full advantage, quickly driving to the end zone and scoring on a short Omey TD run.

The Eagles, however, refused to go down easily, marching right back upfield to tie the game again with just five minutes remaining in the quarter.

It was their last possession that would not end in a turnover.

On the Crusaders’ ensuing drive, they marched to the Eagles’ 20-yard line to set up the game-winning field goal, with Prudhomme pulling in a pivotal 47-yard reception along the way.

“He nailed it right down the middle,” Tomlin said of Perez-Estrada’s attempt. “He absolutely crushed that kick. It would have been good from a lot farther. He’s been such a great addition to our team.”

The NCS title is the fifth in the program’s history, and Tomlin’s second. He also recently won three NCS girls basketball championships at the school.

“For the program, it’s just amazing,” the head coach said. “We’re playing schools a lot bigger than us. After we won it the last time (2015), the NCS moved us up.

“It’s just been a great run for St. Bernard’s.”

In 2015, the Crusaders went on to win a state championship and they’ll be hoping for more of the same this year.

Saturday’s win sets up a NorCal Regional matchup next weekend, with a state bowl berth on the line.

The Crusaders will be hoping to host their regional game at HSU’s Redwood Bowl, with the schedule and game sites due to be announced on Sunday.

“Hopefully we’ll get a home game in Humboldt County, but we don’t care where we have to go,” Tomlin said. 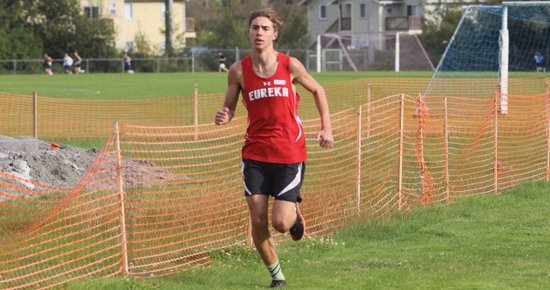