« GRUB DOWN in CONFIDENCE! All Restaurant Inspection Reports in Humboldt County are Now Available Online 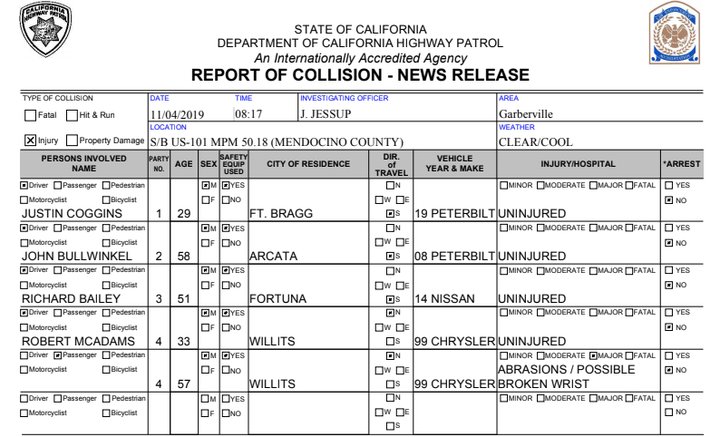 John Bullwinkel was driving a 2008 Peterbilt truck-tractor combination southbound on Highway 101, directly behind the Nissan. Mr. Bullwinkel slowed the 2008 Peterbilt, turned to the left, partially entered the northbound lane, and came to a stop.

Justin Coggins was driving a 2019 Peterbilt log truck southbound Highway 101, in the southbound lane, approaching the other parties, while rounding a curve. Due to Mr. Coggins driving the 2019 Peterbilt at an unsafe speed for the traffic conditions, he was unable to stop the Peterbilt and turned to the left, to avoid a collision with the rear of the 2008 Peterbilt’s trailer.

A passenger in the Chrysler was transported to a local hospital for treatment of injuries.

Caltrans established intermittent traffic closures for both lanes of Highway101 while the offloading and recovery is completed. The estimated time for full cleanup is 3 p.m.

Neither alcohol nor drugs are not suspected as a factor in this collision. This collision is under investigation by the CHP Garberville Area.