A good season for Ferndale and Del Norte football is only getting better.

In addition to the league title each won in high school this season, both communities’ youth football programs will be looking to cap a memorable fall with a pair of Six Rivers Youth Football Conference championships on Sunday.

The Ferndale Mustangs will attempt to make it two straight titles in AAA when they play Del Norte for the championship, the final game of a triple-header of action at the Redwood Bowl.

Del Norte will also play for the single-A championship against undefeated Eel River to get the day’s action under way at 9:30 a.m., while Ferndale will also face a top-seeded Eureka team in the AA decider at noon.

The AAA game is set for 2:30 p.m., although kickoff times could be moved forward depending on the length of the earlier games.

For the Mustangs, it’s the culmination of a lot of hard work.

“I think our kids have a strong work ethic,” Ferndale Youth Football Association president Lucas Titus said. “They always show up to practice every day, and they just work hard.”

It’s a tradition they grow up with in Ferndale, one of football and one of hard work, and it’s one that is handed down from team to team.

This year’s three youth football teams in the Cream City each received a top-two seed for the playoffs — the single-A squad fell 20-12 to Del Norte in their semifinal last weekend — and all three have been helped all season by the high school’s football team.
“(The tradition) helps quite a bit,” Titus said. “We practice at the same field as the high school kids, and they come over to work with our kids, usually once a week. And we get great support from the coaches at the high school level.”

This year’s AAA Mustangs feature around 12 players from last year’s championship team, according to Titus, and also have four or five kids playing football for the first time.

And under first-year head coach Levi Buck, a long-time local coach, the Mustangs have been learning some new offensive systems this year and appear to have adjusted quickly.

The AA Mustangs, meanwhile, also have had recent success, winning the single-A championship as a team a few years back and reaching the first round of the AA playoffs last year.

“They just continue to work well as a team,” Titus said of the squad, which is coached by Rush Renner.

Titus, however, is expecting a battle from both Del Norte and Eureka this Sunday, the only teams to beat either Mustangs squad this season.

“It will be good for us. They’re both strong teams,” he said. “Eureka AA are tough. They have an outstanding quarterback.” 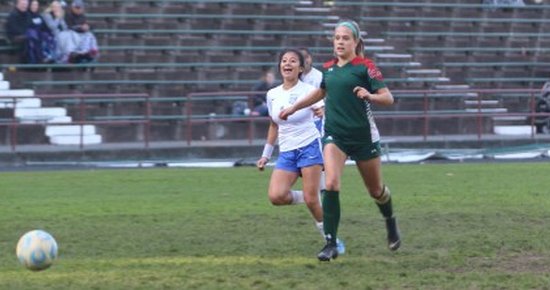