MONDAYS WITH MICHAELE: Cops! Donuts! What Could Go Wrong? »

Five of the eight ranked local football teams remained exactly where they were a week ago in the updated MaxPreps North Coast Section rankings.

One team, however, did a make a notable move, with the St. Bernard’s Crusaders overtaking Kennedy of Richmond as the top-ranked team in Division 6.

Kennedy suffered an upset loss to El Cerrito over the weekend.

St. Bernard’s is also now ranked No. 31 overall in the NCS, one spot ahead of Eureka.

The Loggers, who fell 35-0 at Chico on Friday, remain No. 4 in Division 5, one spot behind the No. 3 Del Norte Warriors, who dropped one spot during their bye week.

In Division 6, Arcata remains firm at No. 10, while in Division 7, Ferndale moves up one spot to No. 3 after a fifth win in six games.

It’s important to remember that the NCS rankings do not decide the playoff field in any of the seven divisions.

Interestingly, Prep2Prep.com last week listed their current playoff predictions and seeds in each of the eight-team brackets, with six of the eight H-DNL teams included.

Del Norte is listed as their No. 2 seed in Division 5, with Eureka three spots back.

In Division 6, St. Bernard’s was their No. 2, but that was before No. 1 Kennedy lost, with Arcata also in their bracket at No. 8.

The Warriors will be playoff eligible with a win over McKinleyville next week. 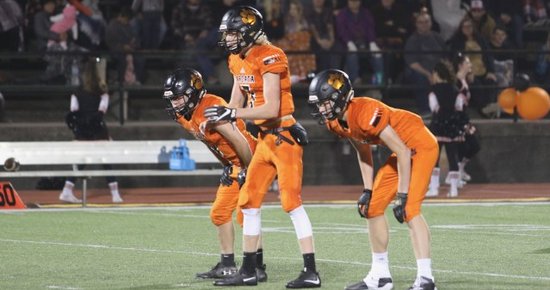