H-DNL Girls Preview — Who Can Stop the Loggers? »

With six straight league titles to their credit, the Fortuna Huskies remain the team to beat as league play gets under way on Wednesday in boys soccer.

Whether Arcata, McKinleyville or Eureka is ready to challenge that dominance remains to be seen, but all three of them will be eager to knock the reigning champs off their perch.

The Huskies open at home to Del Norte, the team that pushed them all the way a year ago and almost upset them in the North Coast Section Championship game.

Also in action on Wednesday, McKinleyville travels to Eureka and Arcata plays at South Fork.

Neither Ferndale nor Hoopa will field a team this season, while St. Bernard’s has a bye.

Here then is a breakdown of this year’s top contenders.

The Arcata Tigers head into league play with a record of 1-1, having being dominated in the second half of a 5-2 loss to Fortuna and getting the better of McKinleyville 2-1, both at the Mack tournament.

And new head coach John Davidson has a mixed roster of youth and experience as he adapts to his new team and the players adapt to a new coach.

But he expects a balanced lineup, from a freshman goalie to a handful of key returning seniors.

“It’s really a group effort to be honest,” Davidson said.

This year’s team will be captained by Jack Taylor, Conor Olsen and Levi Robins.

And the new coach likes the attitude he’s seen from his players so far.

“I love working with players that are motivated and intelligent, and this group is a stand-up group as far as their character, maturity and motivation,” he said.

Davidson also believes this year’s Tigers will be a versatile group that can fit to a lot of different styles.

“We can set up in a variety of ways,” he said. “It seems like this team doesn’t need a dedicated system or style. I feel we can adapt to opponents and circumstances.”

The Eureka Loggers will try out a new look this year under a new head coach, and so far the players appear to be adapting well.

“The way we want to play, the boys are really buying into it,” head coach Eddie Garcia said. “We’re focusing on possessing the ball more … we want to build as a team and defend as a team.”

The new coach is also looking for leadership from throughout the team and not just co-captains Kai Gallegos and Jesus Parra.

“We’ve got a few different guys stepping up, but I tell them everybody’s got to be a leader out on the field,” Garcia said.

Fourth-year varsity player Grant Barrera is back and is expected to play a big role, as is sophomore defender Vic Bang, who has been “stepping up big time,” according to his coach.

Senior Cristian Bravo will start in center midfield and is also expected to play a pivotal role.

“We’re expecting big things from him,” Garcia said of Bravo. “He’s really excited. He wants this to be hist best year.”

As for this year’s H-DNL, Garcia is expecting a battle.

“I think it’s going to be really close,” he said. “Every team has gotten better, and now it’s more even. I feel anybody can beat anybody.”

Huskies will be tough to stop

If their pre-league play is any indication, the Huskies will be tough to beat in 2019.

They certainly have been thus far and are off to a 5-0 start, including non-league wins over league rivals Arcata and Eureka.

“Some things are working, and there are still some things that need work,” head coach Daniel Holmes said. “I like the team chemistry. They’re making sure they’re doing the best they can, and they’re linking up well.”

Early-season conditioning was a concern at the recent McKinleyville tournament, and it’s something Holmes continues to work on with his players.

Apart from that, there is not a lot to fault about the defending NCS champions, and they will go into the new league campaign as sizable favorites.

Key to the team this year will be the return of two players who spent last season playing on the Mendocino Eagles travel team instead, senior defender Geovaney Ramirez and junior midfielder Sergio Marquez.

Marquez will be joined in midfield — eventually — by talented sophomore Antonio Garcinuno, although injuries have seen the duo play together for just one half of the team’s first five games.

Up front, the exciting and creative Fernando Atilano returns for his junior season and should be a legitimate MVP candidate, while in defense another junior, Angel Ornelas, is off to an impressive start this year.

And team defense will be key again for the defending league and section champs.

“My whole idea is always defensive,” Holmes said. “We build out of the back and let the ball do its job.”

Injuries have been a concern early in the season, although the coach is expecting to be close to full strength in time for Wednesday’s opener.

McKinleyville optimistic ahead of new campaign

The McKinleyville Panthers expect to be much improved in 2019 and head coach Ryne Deppe is excited with what he’s seen so far from his players.

“Our talent level this year is higher than it’s been in all the time I’ve been here,” the fifth-year Mack coach said. “It’s by far the most talented team I’ve had.”

The Panthers will look to seniors Caleb Coke and Alex Macy to lead the way, along with juniors Dustyn Heneke and Narayan Weibel.

Coke returns after playing last fall with the Mendocino Eagles travel team and is expected to add some bite to the Panthers attack, while the experienced Macy will help anchor the defense.

Heneke and Weibel will each also start in midfield and attack.

In addition to their talent, the head coach has been pleased with the attitude his players have shown this preseason.

“Overall we have fun every day trying to get better,” Deppe said. “We’re a talented group that has fun at practice and fun improving. And we do have great leadership this year.”

In goal, junior Ethen Shelley returns to provide a last line of defense, while in front of him defenders Nathan Witte and Isaac Ward will be expected to play a big role in defense alongside Macy. 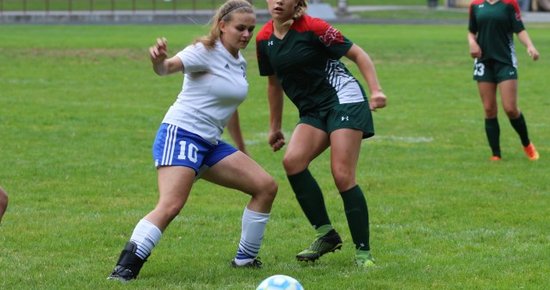