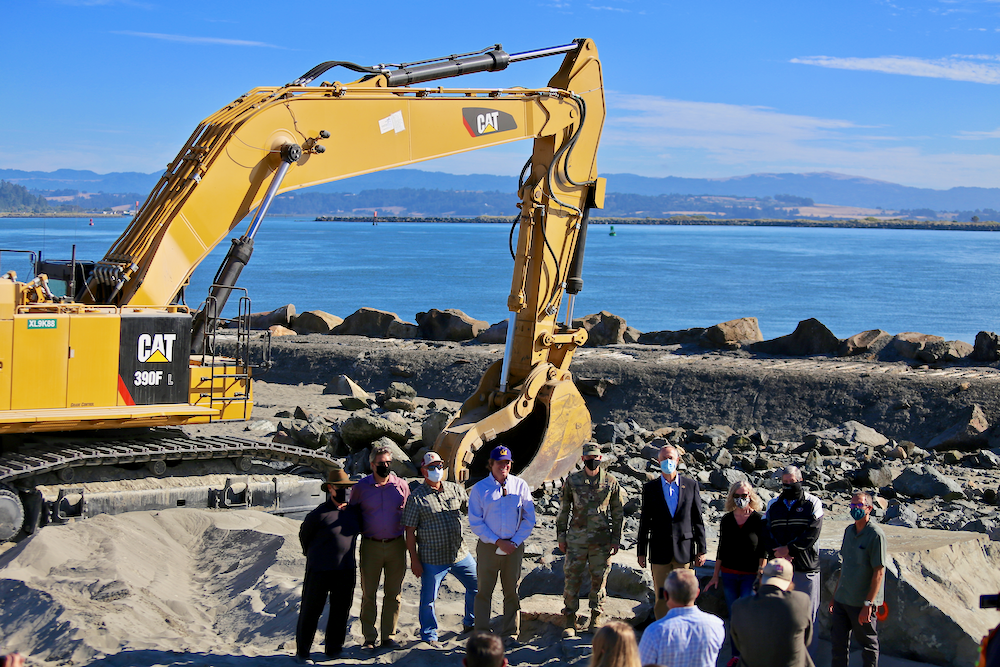 A couple dozen local officials and community members slogged through sand near the North Jetty Tuesday evening to commemorate the start of the Humboldt Jetty Repair Project. The federally funded $22 million effort will provide extensive repair work to the North and South Jetties situated at the mouth of Humboldt Bay Harbor, both of which have experienced significant and visible structural deterioration at the hands of powerful North Coast waters over the years. The jetties, which combined are around 8,000 feet in length, were initially constructed in the 1890s and last received major repairs in the 1970s.

A U.S. Army Corps of Engineers release provided to the Outpost states that the nature of work will include “resetting pre-existing stones, placing newly quarried stone, and pouring new concrete cap where needed. The need for these actions is to stabilize the jetties in order to prevent further degradation from storm surges and severe wave activity.”

Standing adjacent a hulking hydraulic excavator used to move giant boulders for the project, a handful of speakers celebrated the cause. The Outpost was on hand for the occasion and snapped a few photos. 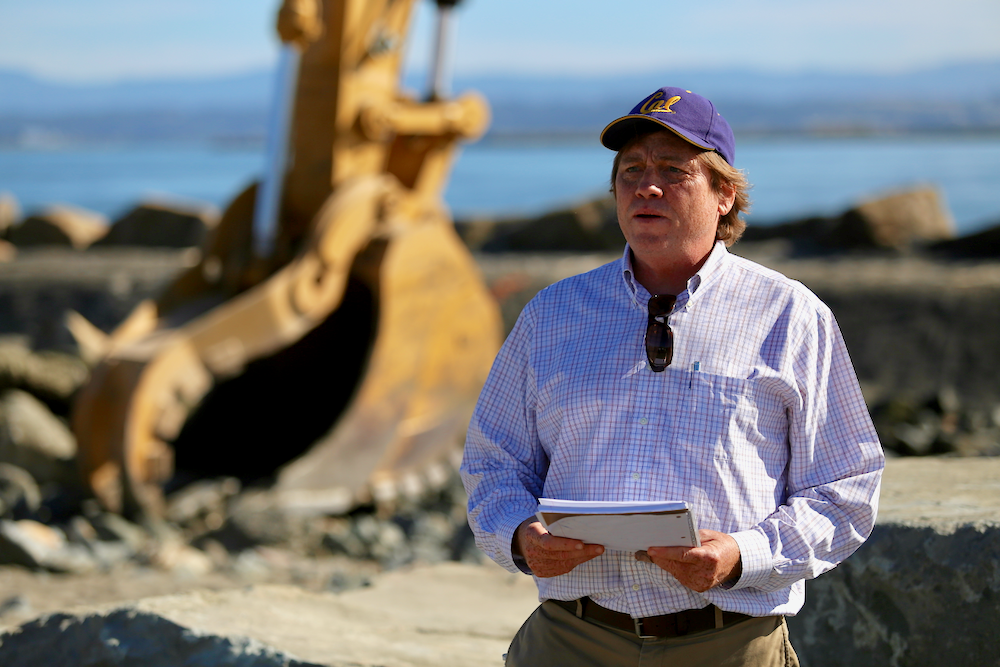 Project manager Peter Mull, U.S. Army Corps of Engineers: “This project will ensure the continued legacy of these jetties to serve and maintain the economic vitality of this harbor and the absolute treasure that is Humboldt Bay to the community, to the State of California and to the nation for decades to come.” 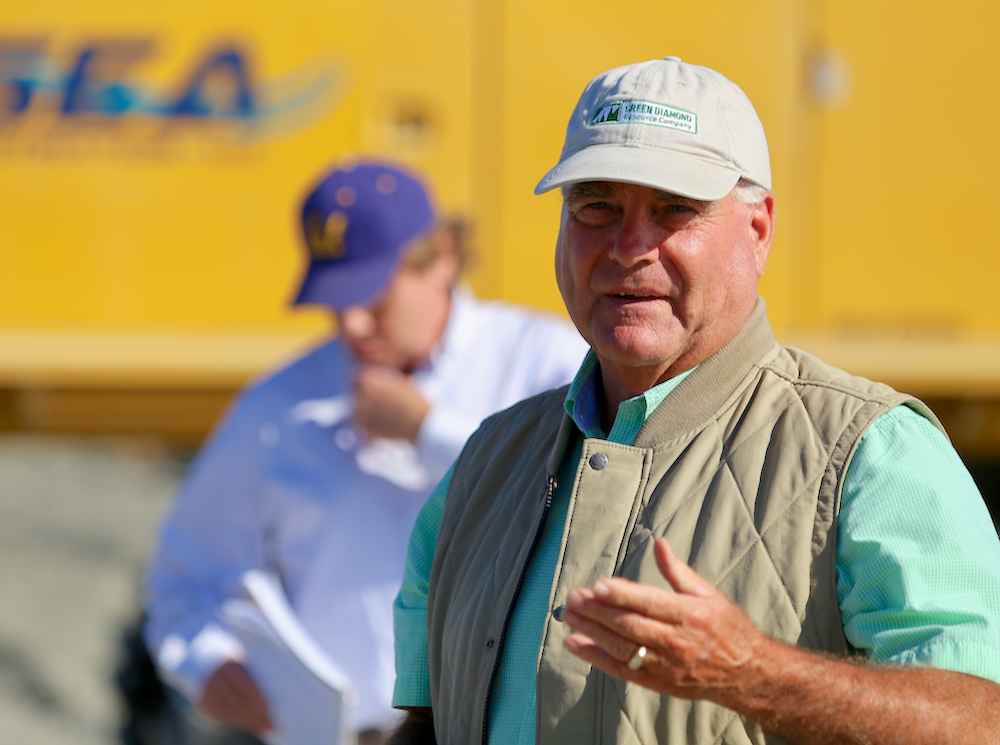 Gary Rynearson, Green Diamond Chief Communications Officer: “The importance of keeping these jetties safe and keeping the harbor properly dredged for the safe passage of not only the deepwater vessels that we bring in … but for the recreational folks, the Coast Guard, and the hobby boats that come in here is just tremendous. The importance of it can’t be overstated.” 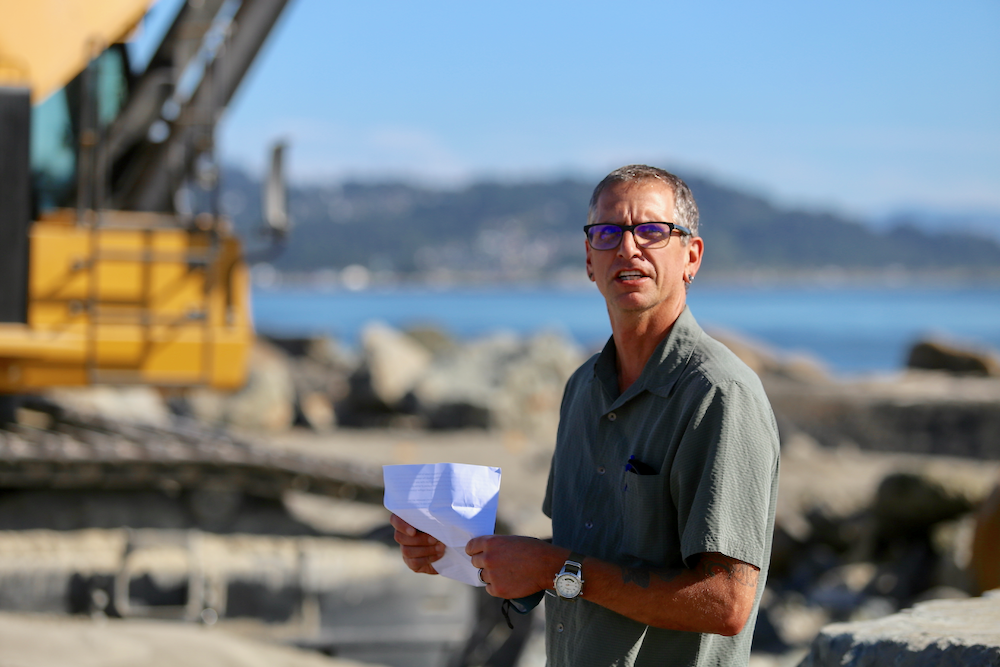 Humboldt Bay Harbor Commissioner Stephen Kullmann: “As most of us here already know, Humboldt Bay is the only deepwater port between San Francisco and Coos Bay and the second largest enclosed bay in the State of California. Shipping continues to be an important part of the economy of the area, as is our commercial and recreational fishing fleet.” 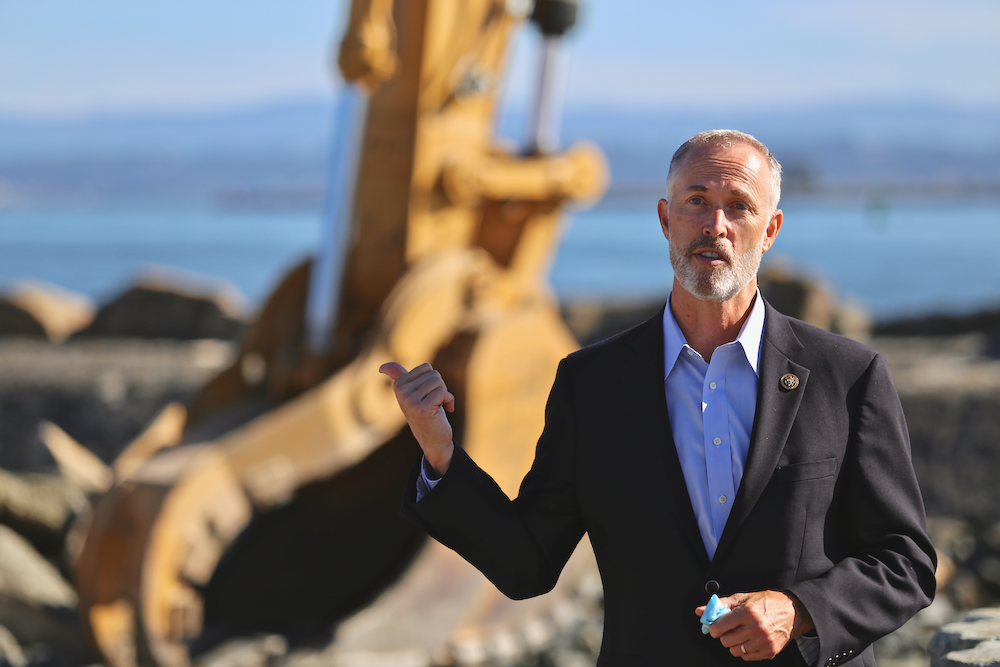 Congressman Jared Huffman: “This is big. It’s ambitious. As I was driving over here and admiring these beautiful dunes I was wondering, what would it actually take to hold firm a jetty in a place like this. Then I drove up and saw those enormous boulders that you have brought in — and this [excavator] is impressive as well. You’re doing something at a scale that is really remarkable and it wouldn’t happen without an incredible unified community.” 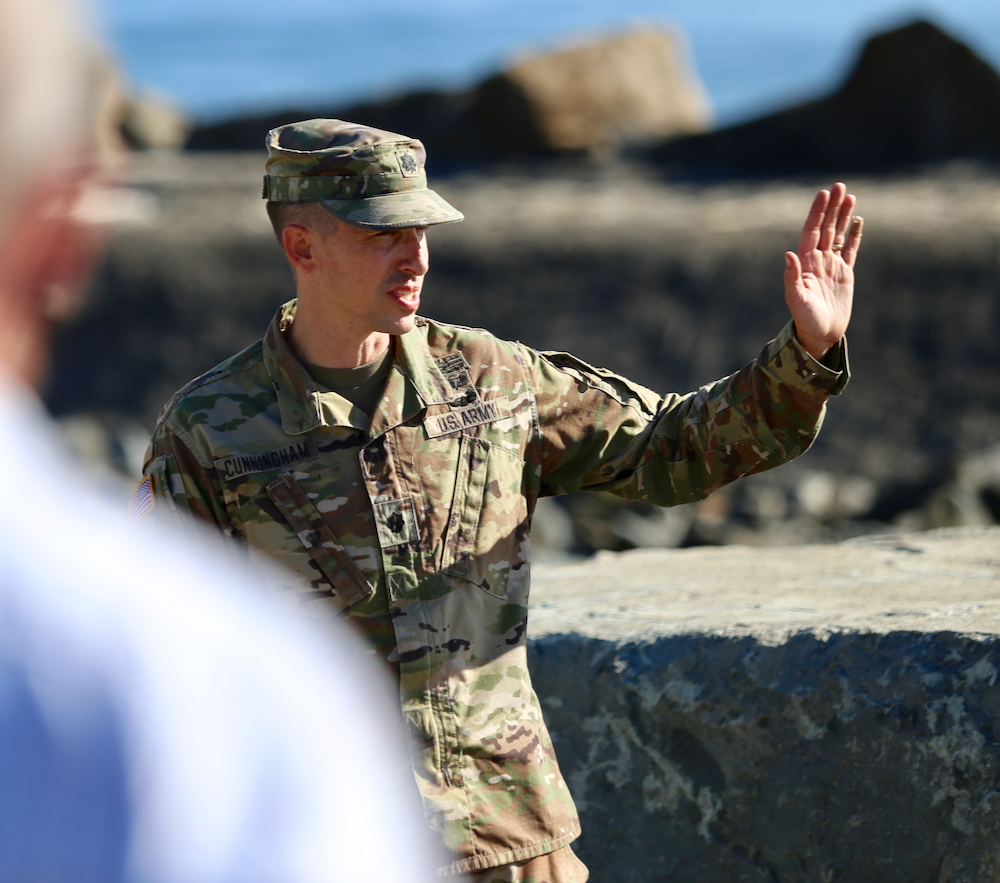 Lt. Col. John Cunningham, U.S. Army Corps of Engineers: “I came from the Texas coast and I’m used to a little bit calmer ocean. It’s really powerful here, so this is impressive to me — the design work and the way the project delivery team came together to get something that’s technically feasible that’s going to stand the test of time.” 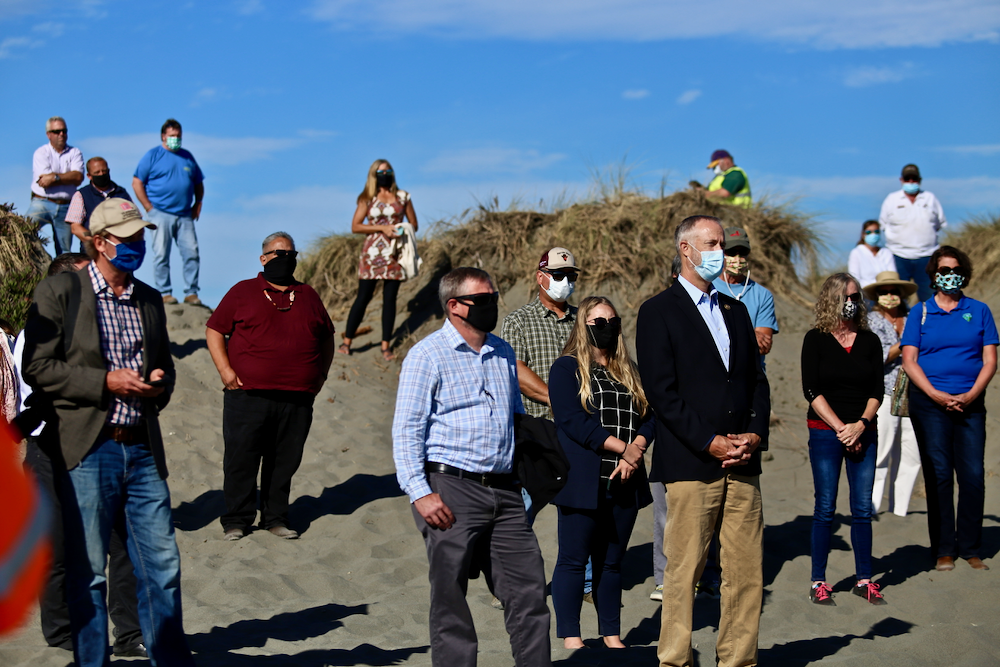 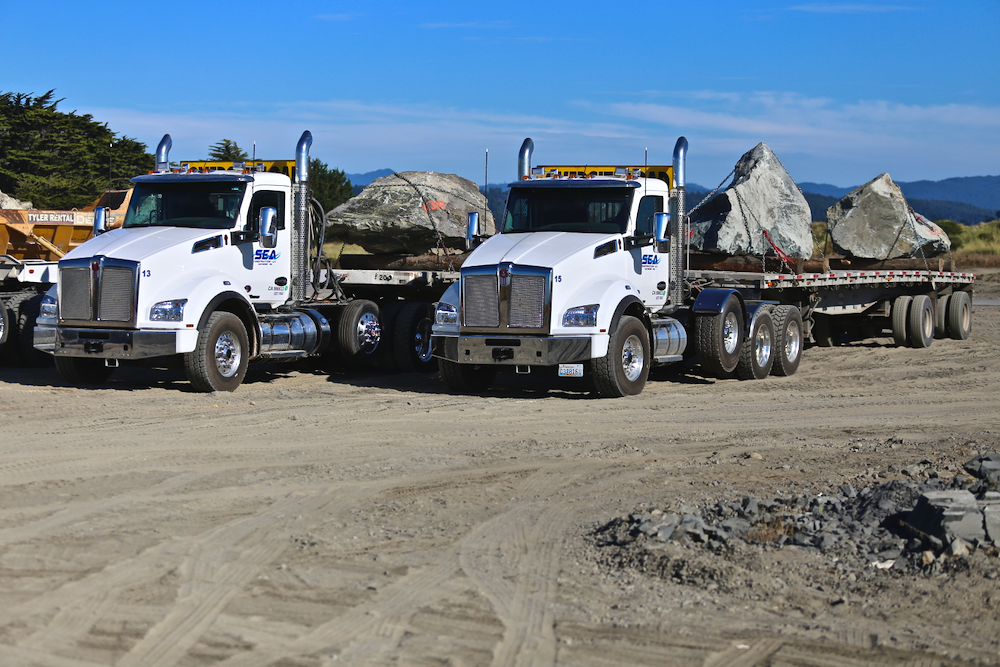 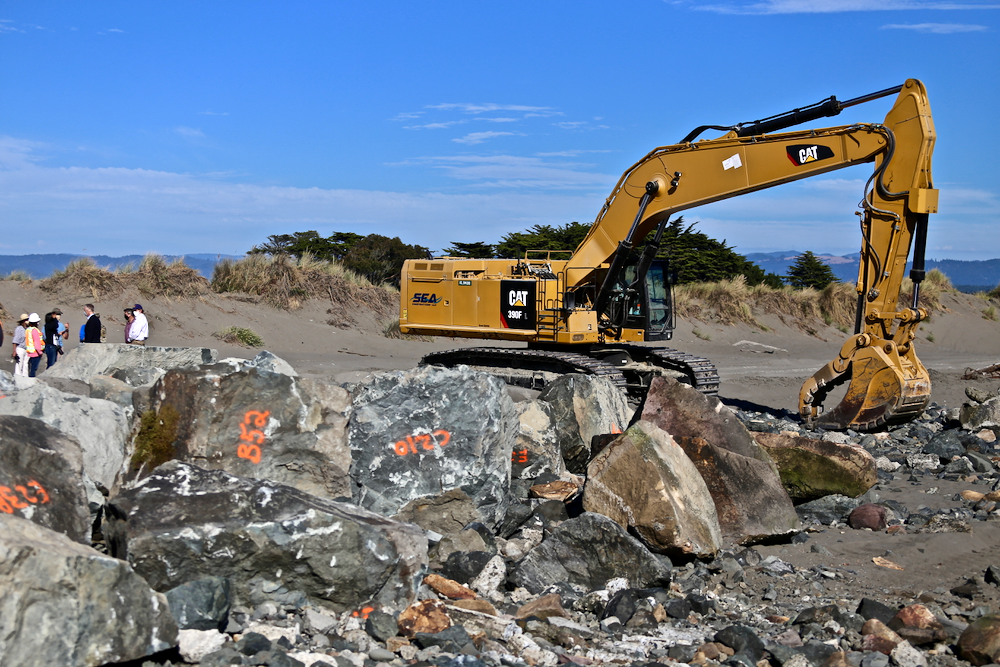 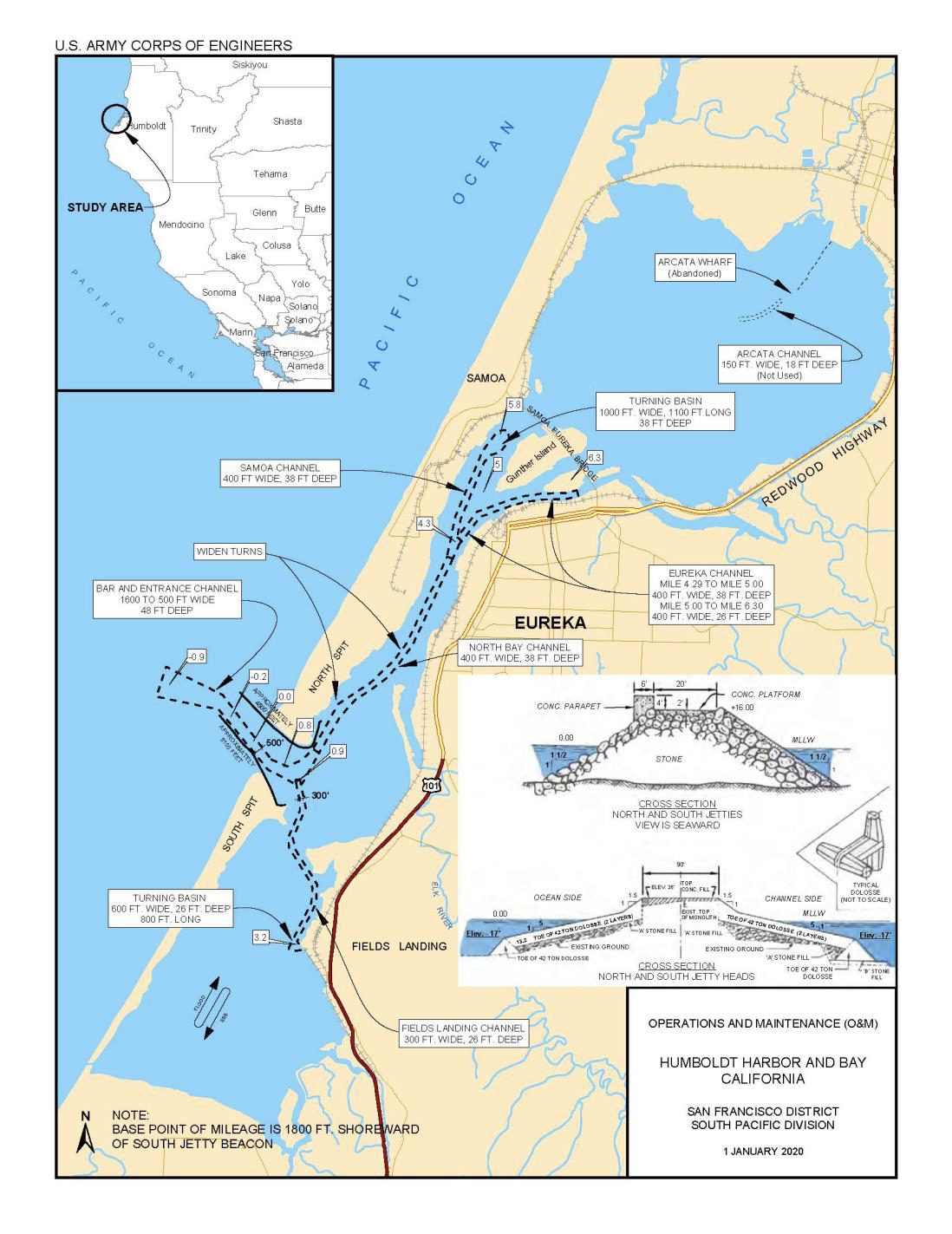 Further information about Humboldt Bay and the jetties provided by the U.S. Army Corps of Engineers. Click to enlarge.