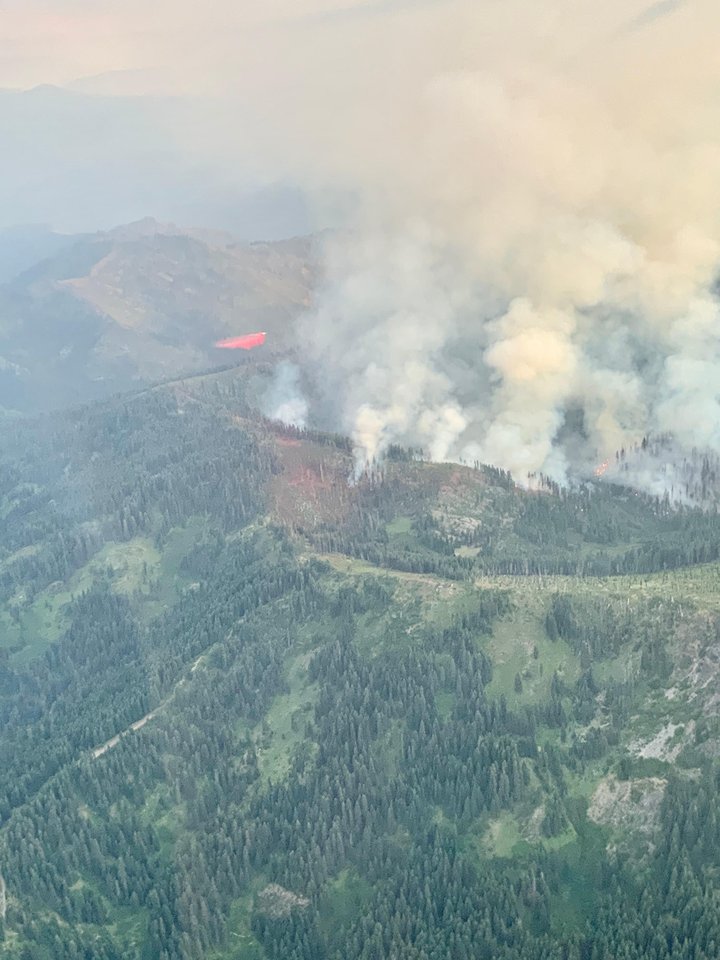 Photo of the Red Salmon Complex as seen from the Denny area. | NWS IMET Operations.

A pair of wildfires burning northeast of Hoopa along the intersection of Humboldt, Trinity and Siskiyou Counties in the Six Rivers and Shasta-Trinity National Forests has grown to 1,877 acres and remains zero percent contained since the fires were ignited by lightning on July 27.

The U.S. Department of Agriculture reports that the growth for the Red and Salmon wildfires, referred to as the Red Salmon Complex, have mostly been terrain driven and that fire activity is low today.

“Crews today are focusing on reinforcing indirect control lines on both fires utilizing minimum impact suppression tactics in the wilderness,” the U.S. Department of Agriculture stated in a press release this morning. “An inversion layer is sitting over the area causing smoke to settle over both fires which could potentially limit air operations.”

An air-quality-monitoring specialist has been assigned to the fire to provide smoke forecasts and air-quality information for the surrounding communities.

Photos of smoke as seen from the Weitchpec area. | Photos by PG&E, provided by the National Weather Service.

As of this morning, the Red Fire has grown to 1,252 acres and the Salmon Fire is 626 acres in size. Firefighters will reportedly be patrolling the northeast portion of the Salmon fire today to prevent it from spreading into the Klamath National Forest.

Big Rock River Access is currently closed as firefighters are using the area as a helicopter dip site.

Photo by Calfire, provided by the NWS.

Read more from the U.S. Department of Agriculture:

The Red Salmon Complex continues to burn in the Six Rivers and Shasta Trinity national forests. The complex is currently at 1,877 acres and 0% contained. Fire growth for each fire has been mostly terrain driven with some short, uphill runs. Crews today are focusing on reinforcing indirect control lines on both fires utilizing minimum impact suppression tactics in the wilderness. An inversion layer is sitting over the area causing smoke to settle over both fires which could potentially limit air operations. An air quality monitoring specialist is assigned and will provide smoke forecasts and air quality information for the surrounding communities.

The Salmon Fire is 626 acres and 0% contained. Smoke from the Red Fire will create shade over the Salmon Fire which will decrease fire activity. Firefighters will patrol Salmon Summit Ridgeline looking for possible spot fires and continue mop-up operations on the northeast portion of the fire to prevent growth into the Klamath National Forest. Taking advantage of smoke shading and reduced fire activity, crews will begin direct line construction along the east portion of the fire.

Weather: A high pressure system has moved into the area which has created an inversion that will hamper ventilation in the fire area. The ridgeline line winds will be predominantly from of the northwest pushing smoke from the Red Fire to the Salmon. This weather will supply dry air conditions with poor humidity recovery as well as the possibility of smoke laying down over the fire area.

A firefighter shares a photo from the picturesque forest on Instagram.