Deputy Health Officer Josh Ennis Talks About Infection Rates and Illness, the Current State of Testing and Much More in Today’s Media Availability » 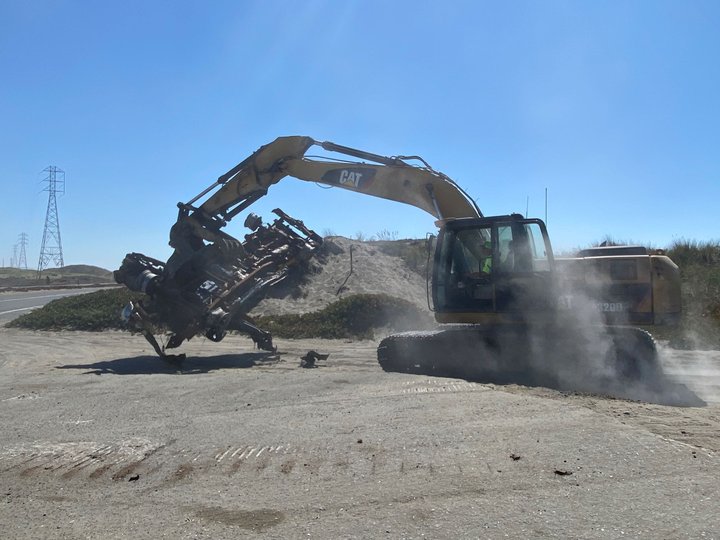 A torched truck is excavated from Samoa beach. | Photos provided by the HCSO.

Two vehicles abandoned on Samoa Beach have been removed thanks in part to community advocates and the help of two local businesses.

On Aug.15, Humboldt County Sheriff’s deputies assisted personnel from the Mercer Fraser Company and Zerlang and Zerlang Marine Services in the removal of two trucks that had been abandoned on Samoa Beach.

The vehicles were previously reported stolen and located at the beach, however they could not be removed at the time they were found due to being severely stuck in the sand. Since being located, the trucks have been stripped, vandalized and set on fire by unknown subjects.

Several community members have contacted the Sheriff’s Office to report the vehicles and advocate for their removal.

With the help of Mercer Fraser Company and Zerlang and Zerlang Marine, the Sheriff’s Office was able to remove the vehicles using a Front Loader and Excavator. The vehicles were then recovered by the Eel River Transportation and Salvage Company for disposal.

The Sheriff’s Office would like to thank the Mercer Fraser Company, Mercer Fraser Company Front Loader Operator Tim Reynolds, Zerlang and Zerlang Marine Services, the Eel River Transportation and Salvage Company and Humboldt Towing for their hard work and dedication to keeping our local beaches clean for the community.