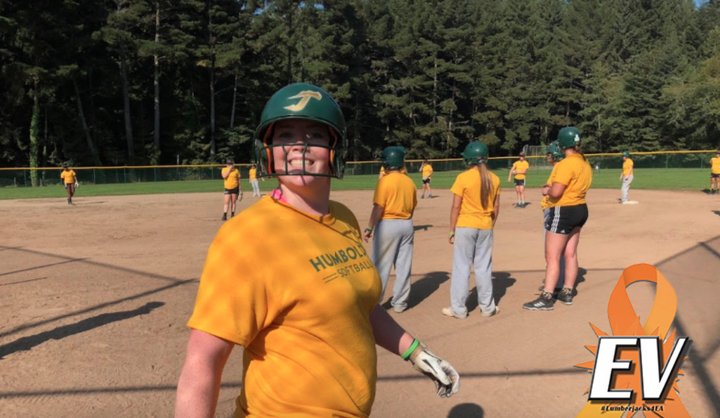 A Humboldt State softball player has died, according to a press release put out by the university’s athletics department.

Sophomore Evelyn Andrews reportedly passed away this week due to complications caused by her second battle with cancer in two years.

Undergoing chemotherapy to treat a cancerous tumor found between her heart and lungs in 2017, Andrews beat cancer in time to finish her fourth year of varsity softball at Davis High School in Davis, Calif. and went on to earn First Team All-League, MVP and Offensive Player of the Year awards.

The brave teen graduated high school in 2018 and redshirted her freshman year with the Lumberjacks while working towards a degree in kinesiology.

In September of 2019, Andrews was hospitalized after suffering a broken nose during softball practice at HSU. Within 24 hours, her health began to worsen and she developed a fever of 105 degrees.

“After multiple hospital trips for blood tests, they determined her platelets were low,” HSU said in a statement this week. “On October 10, Evelyn was admitted to the UC Davis ER Hospital in need of a bone marrow biopsy the next day. As she waited for the biopsy, the news came she was dreading — it was leukemia.”

Following Andrews’ biopsy, doctors diagnosed her with Acute Myelogenous Leukemia, a blood cancer caused by her chemotherapy treatment in 2017.

Upon receiving the news, her fellow Lumberjacks sent words of encouragement and heartwarming videos cheering on her recovery.

We are thinking of you @ev_andrews from your HSU women’s basketball team. Be sure to turn up volume @SoftballHSU #lumberjacks4EA 🙏🏽🥎💚💛 pic.twitter.com/maVu6xCj2j

While Andrews reportedly in the midst of beating cancer for a second time, she sadly passed away as a result of blood clotting complications commonly caused by AML.

“She passed surrounded by family, friends and those closest to her, knowing that she never fought alone,” HSU’s statement reads. “For the record, Evelyn died cancer free. Ev 2, Cancer 0.”

The HSU Athletics Department will be holding a Celebration of Life ceremony for Andrews at Lumberjack Arena this Sunday at 3 p.m. Friends, family and teammates are encouraged to attend and share stories at the reception following the event in the Hall of Fame area of Lumberjack Arena.

Read more about Andrew’s life in the touching essay she wrote before her passing: IN THIS FAMILY, NO ONE FIGHTS ALONE

More from the HSU Athletics Department:

The Humboldt State Department of Athletics lost a member of our Lumberjack Family.

Evelyn Andrews came to Humboldt State with hopes of playing softball beneath the giant redwoods that line HSU’s softball diamond. The game was in her blood, down to the softball-sized tumor found between her heart and lungs right before her senior year of high school. Throughout the fall of 2017, she underwent chemotherapy and by December she was in remission. Without breaking stride, she stepped back on the diamond and completed a fourth year of varsity softball at Davis High School before graduating in June.

With a high school diploma and beating cancer under her belt, Evelyn chose Humboldt State University as her next feat. Andrews made the dean’s list in her first semester and with the advice of Head Coach Shelli Sarchett, she red-shirted the 2019 season. She continued training with travel ball and always managed to find a way on the field.

In September 2019, with it being fall in Humboldt, Evelyn wasn’t surprised when she felt a cold coming on as many teammates were sick. While practicing, she took a ball to the nose on a bad hop, fracturing the bone and causing continuous bleeding. Within 24 hours, her fever had risen to 105+. After multiple hospital trips for blood tests, they determined her platelets were low.

On October 10, Evelyn was admitted to the UC Davis ER Hospital in need of a bone marrow biopsy the next day. As she waited for the biopsy, the news came she was dreading — it was leukemia. Following a biopsy and lumbar puncture, it was determined she has Acute Myelogenous Leukemia (AML)- a secondary blood cancer that was a direct result of the treatment for her lymphoma in 2017.

Over the last four months Evelyn has battled valiantly, but in the end, a clotting complication common in AML patients through [sic] her a curveball. She passed surrounded by family, friends and those closest to her, knowing that she never fought alone.

The Department of Athletics will be holding a Celebration of Life this Sunday, February 23 on the campus of Humboldt State University.  More details will be released on www.hsujacks.com.

Our Interim Director of Athletics, Jill Willson, has been in touch with www.bethematch.org and we are hoping to set up a time in the near future for bone marrow donations.