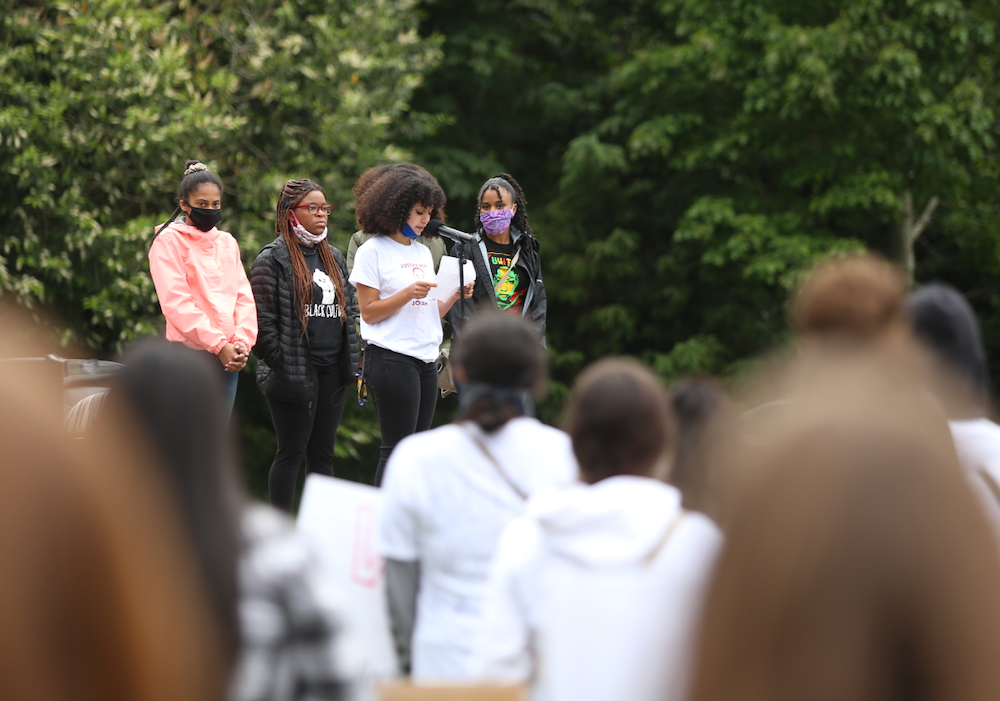 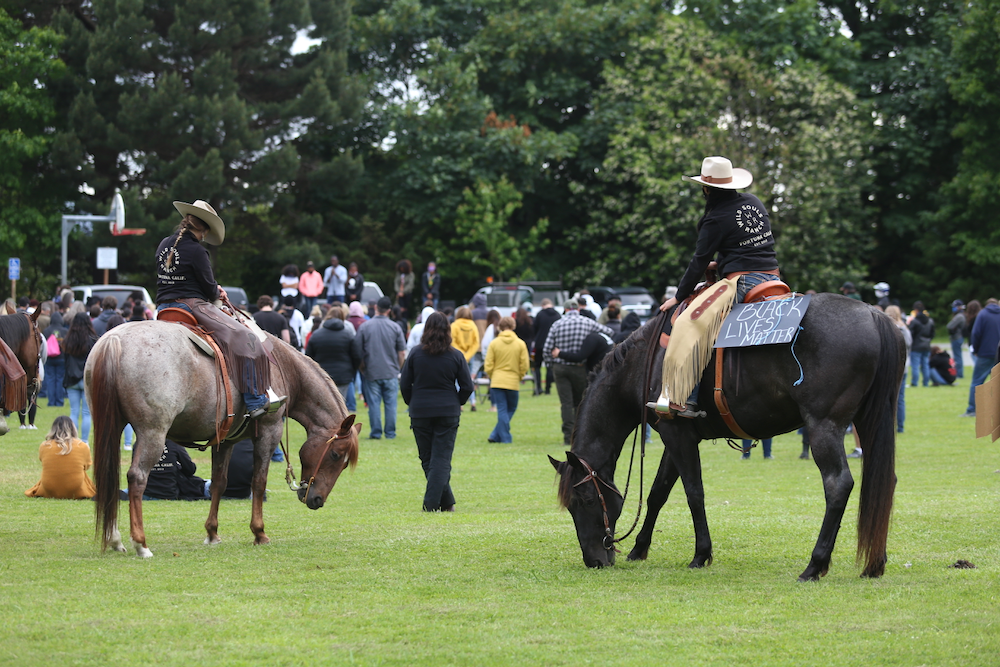 And now in Fortuna. After a historic week which saw demonstrations across the U.S. in response to the brutal killing of George Floyd in Minneapolis at the hands of police officers, several hundred people gathered in Fortuna’s Rohner Park, many carrying signs proclaiming “Black Lives Matter.”

The peaceful evening was led by local Black youth and featured moving testimonials, many from people who’d experienced discrimination in the community.

The Outpost attended the event and took a few photos. 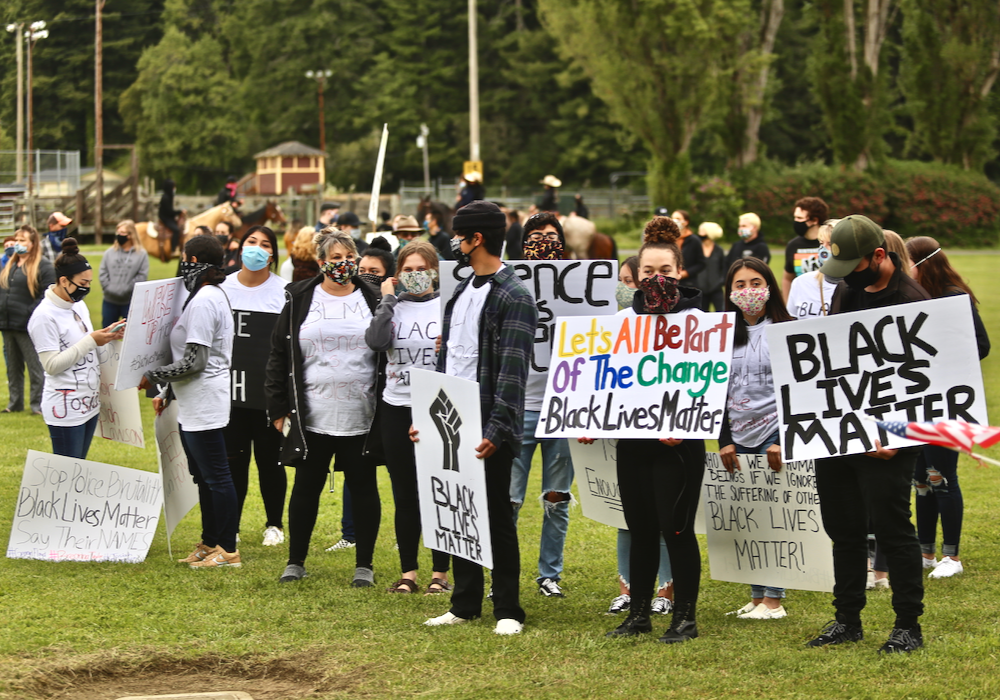 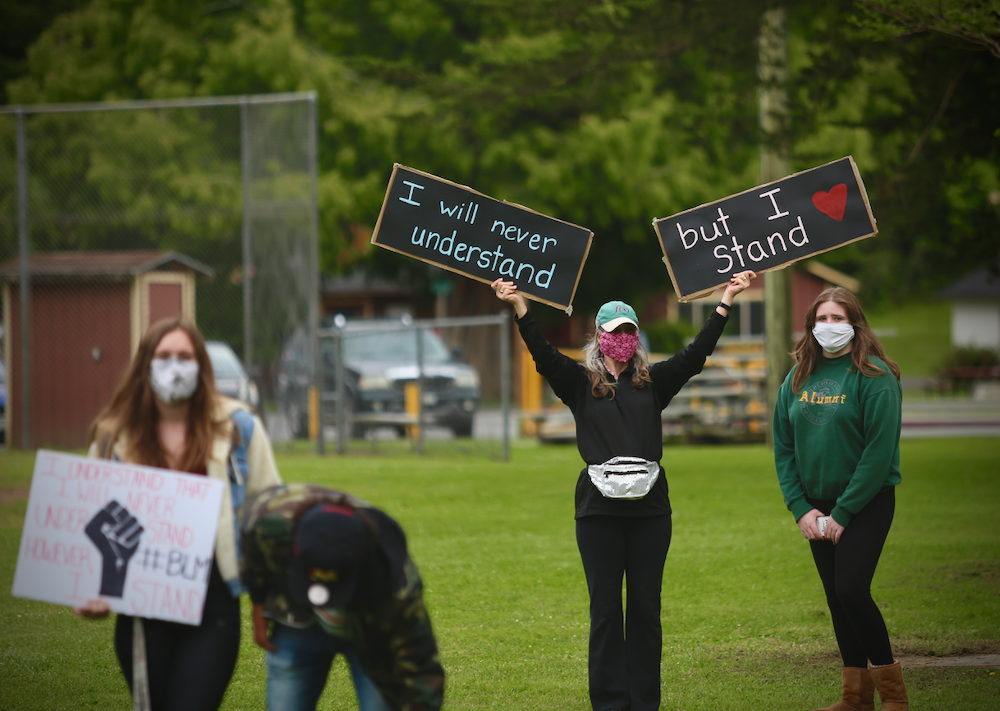 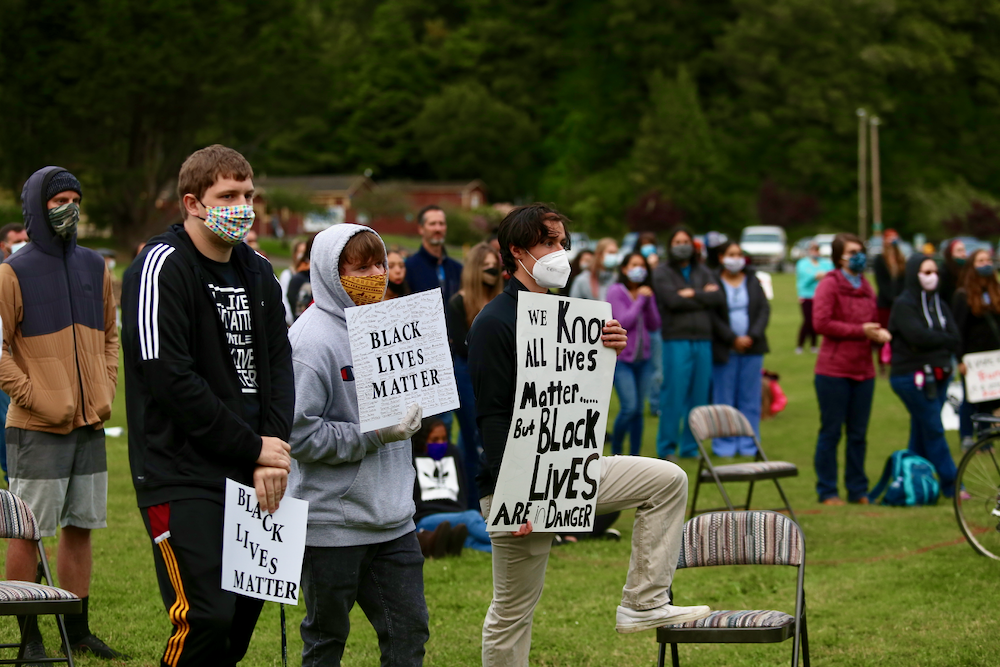 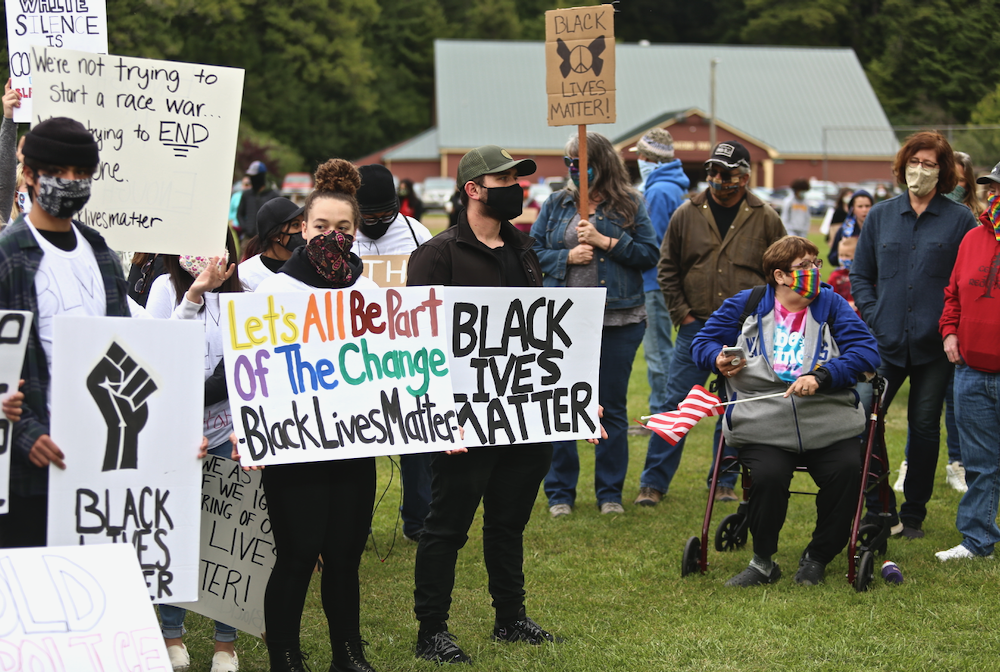 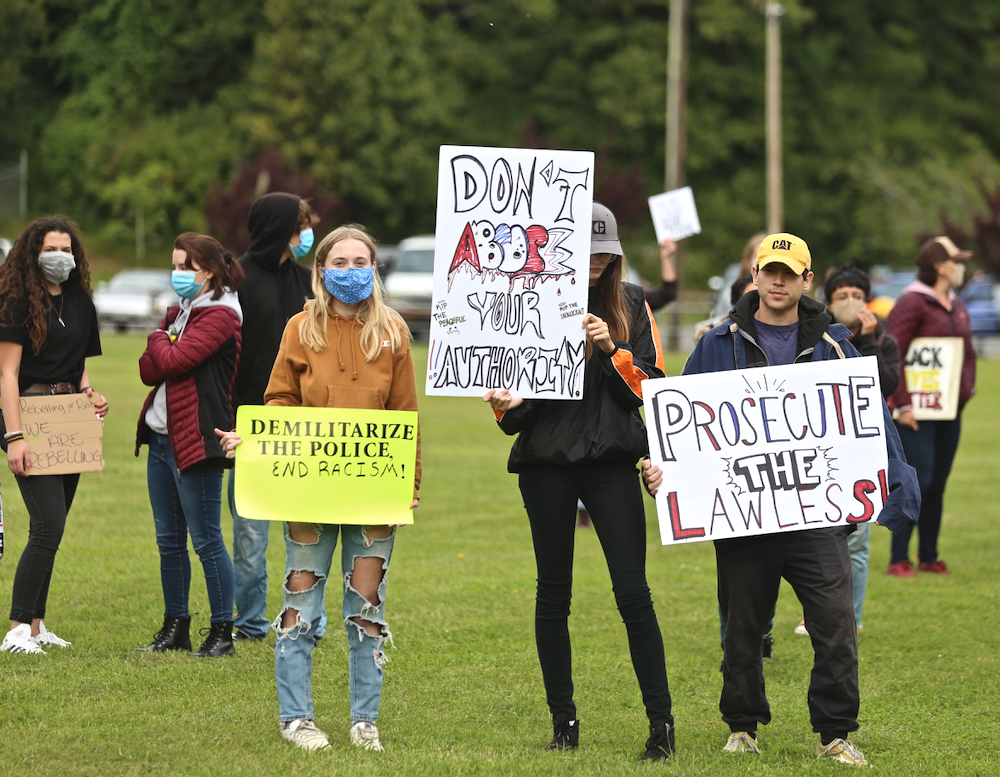 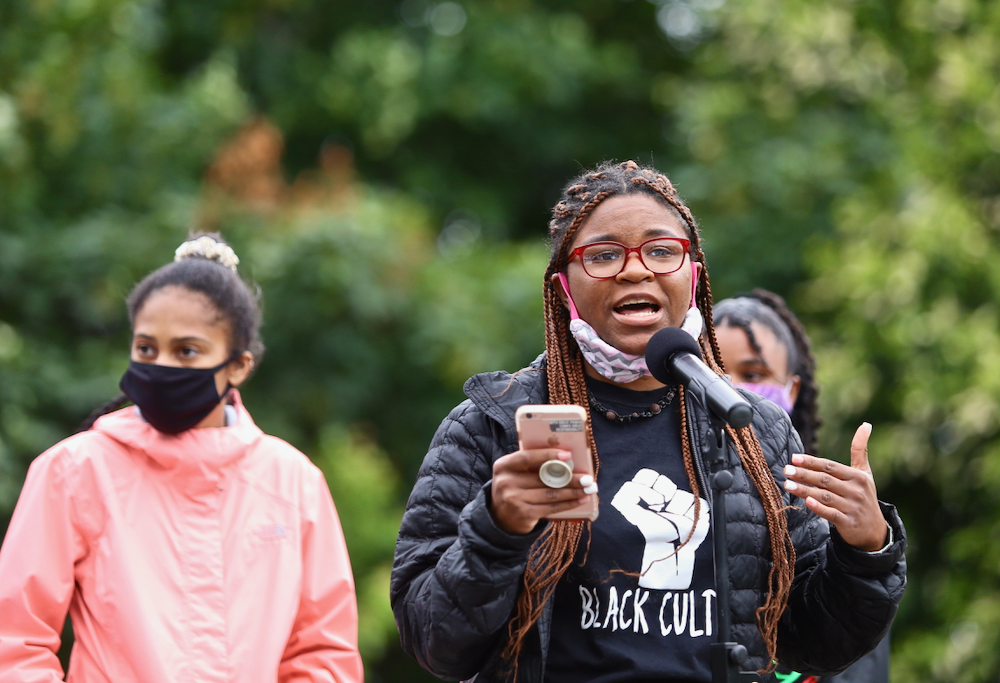 Eureka High School student and event emcee Amaya Watson denounced violence and hoped to see more black leaders in the future.
“If we had more black people winning elections, becoming Congressmen, Senators, Presidents and Secretaries of State, we wouldn’t have to beg the white people to have some kindness in their hearts, to throw us a bone every now and then,” she said. 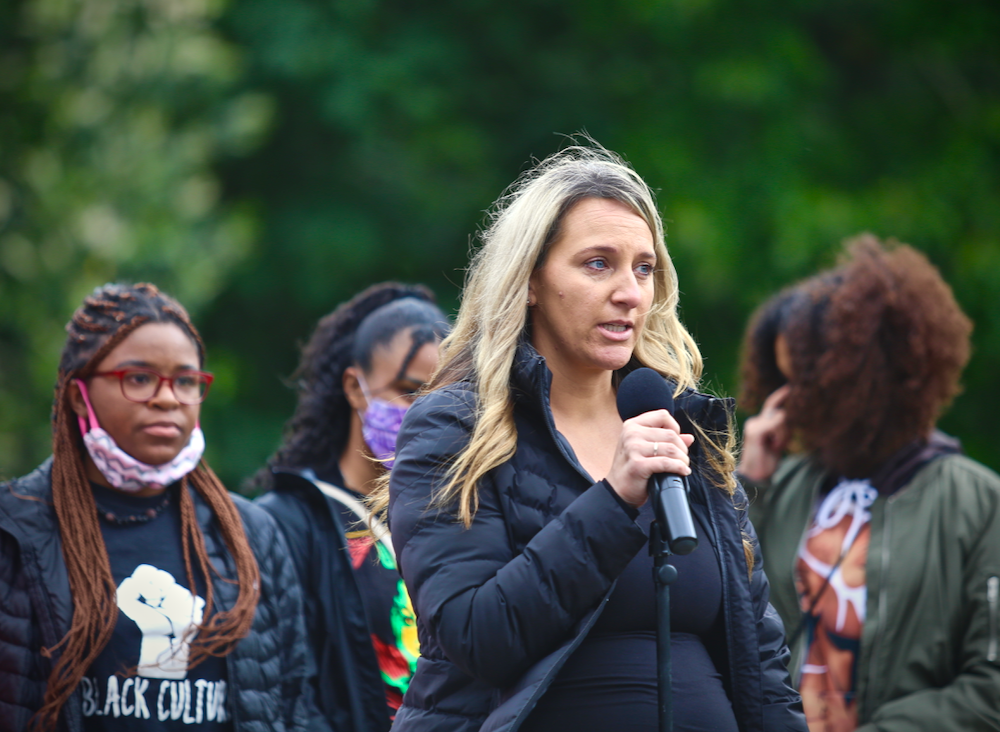 Ashley Florvilus, who grew up in the Eel River Valley, shared about  having her eyes opened to local racism as the wife of a Black man and the mother of Black children. She spoke of her initial ignorance to the problem but called on her community to do better.
“I’ve never thought of myself as being racist, but I was ignorant,” she said. On racism, she added “It’s here. It’s in Humboldt. It’s in Fortuna. It’s the people you grew up with your whole life. And until you stand up and say something when you do hear it and make somebody uncomfortable when they’re comfortable, it’s never going to go away.” 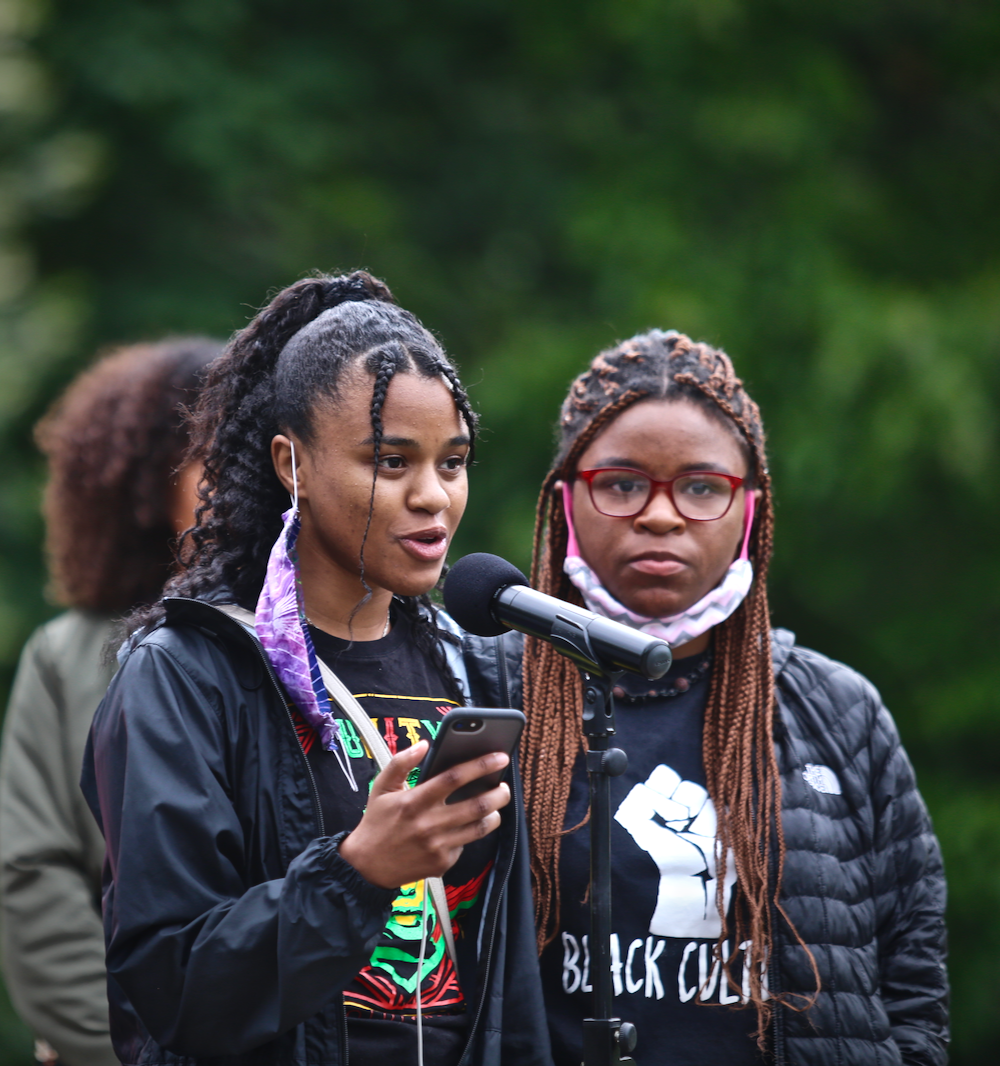 Ayana Watson spoke of the regrettably slow progress toward equality in the United States.
“Although many of our hearts are filled with terror and rage it is important to remain progressive and mindful during these times,” she said. “My heart is with all those in pain, which is why I encourage everyone here to remain aware and educated of the true intentions of the Black Lives Matter movement.” 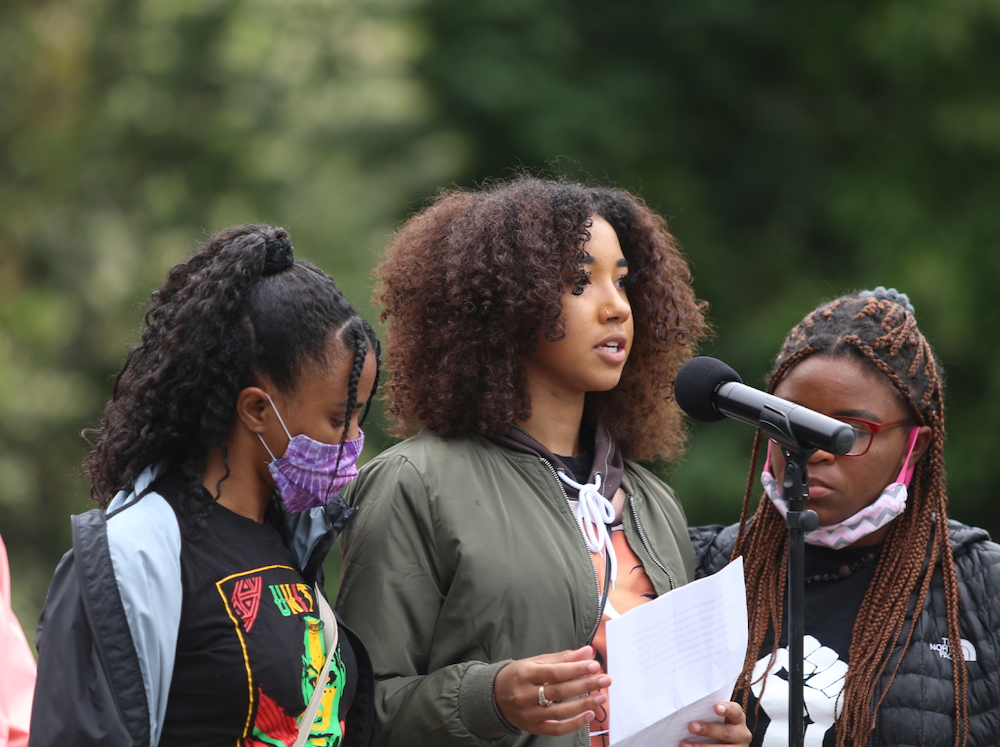 Eureka High School senior Sophia Chalmers asked people to reflect on ways they might be committing racial microaggressions with their words and actions.
“The only way to reduce these incidents is to be aware, question others and take action,” she said. “I bet if you start to pay attention a little bit more to unconscious bias, you will start to realize how much in our everyday lives this is happening. Having biased thoughts doesn’t necessarily make you racist — everyone has them — but actions can still be hurtful even if they’re not intentional.” 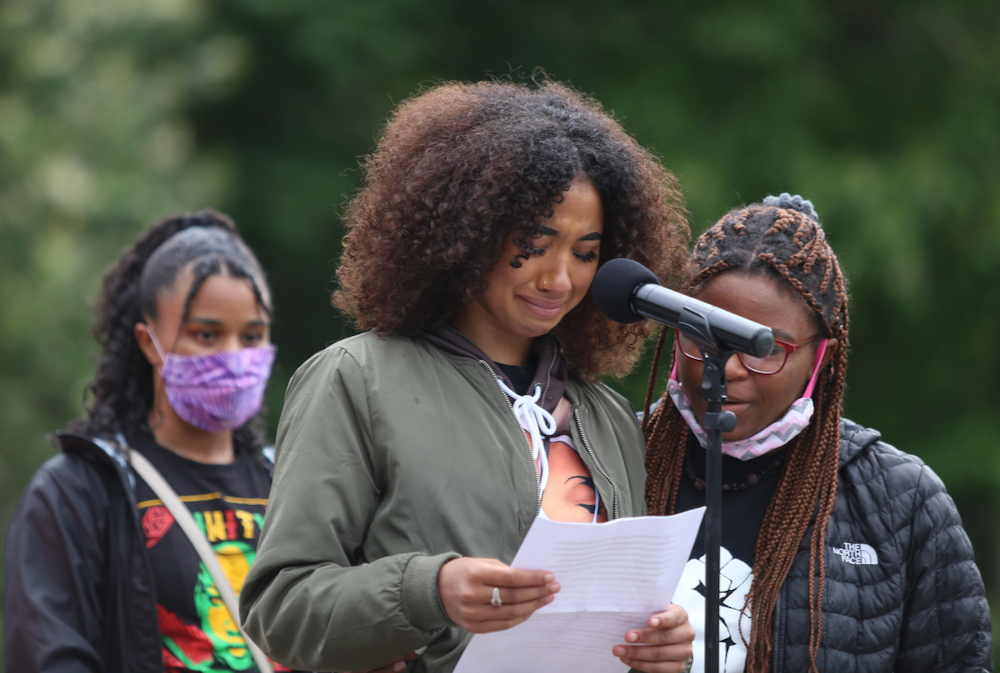 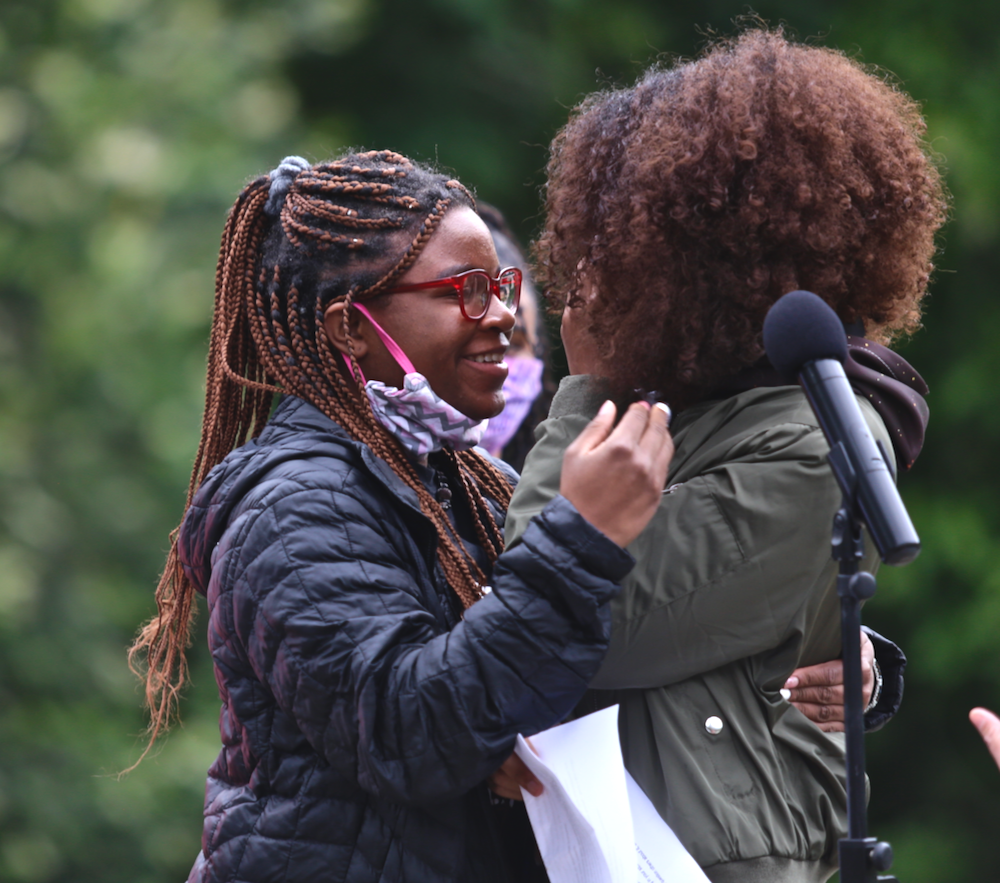 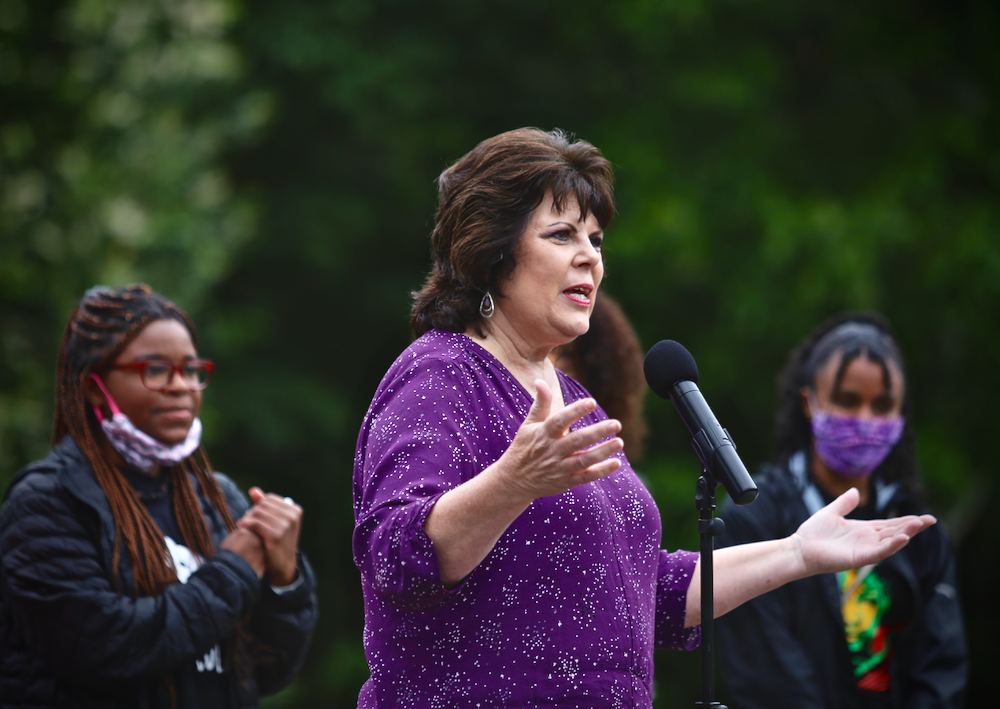 Fortuna Mayor Sue Long got emotional as she talked about the backlash she’d received online from some members of the community for endorsing the event.

“Some of the comments on Facebook on my pages were not good,” she said. “People were saying, ‘Are you prepared to have your town destroyed? What are you going to do when that happens?’ And I just had to step out in faith and say I believe in people and I believe we can do this in a peaceful way.”

Long praised the bravery of the young people on stage and pleaded with the citizens of her city to show up for the local Black community.

“There are people at home tonight because they were afraid to come. I honestly can’t tell you that the entire city council is here, and that makes me sad. But I took a stand and I took a lot of heat for it and you know what, it’s who I am. And I stand with you.”

Long continued, referencing comments that suggested that maybe now was not the best time to hold such an event.

“My response is, if not now, when? ‘Maybe we don’t want this in Fortuna. We don’t want to bring protesters to Fortuna,’” she said, imitating the event’s detractors. “But if not here, where?” (Watch Mayor Long’s entire speech below.) 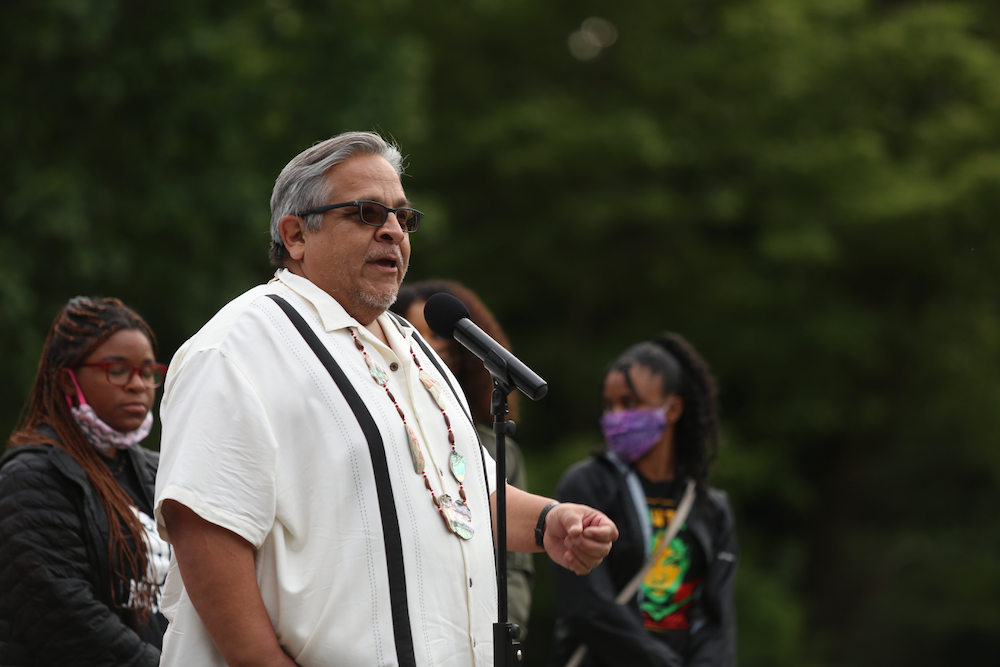 “This is Wiyot country,” said Wiyot Tribal Chairman Ted Hernandez. “I offer this country to everyone who is here today. You are our brothers, you are our sisters.” 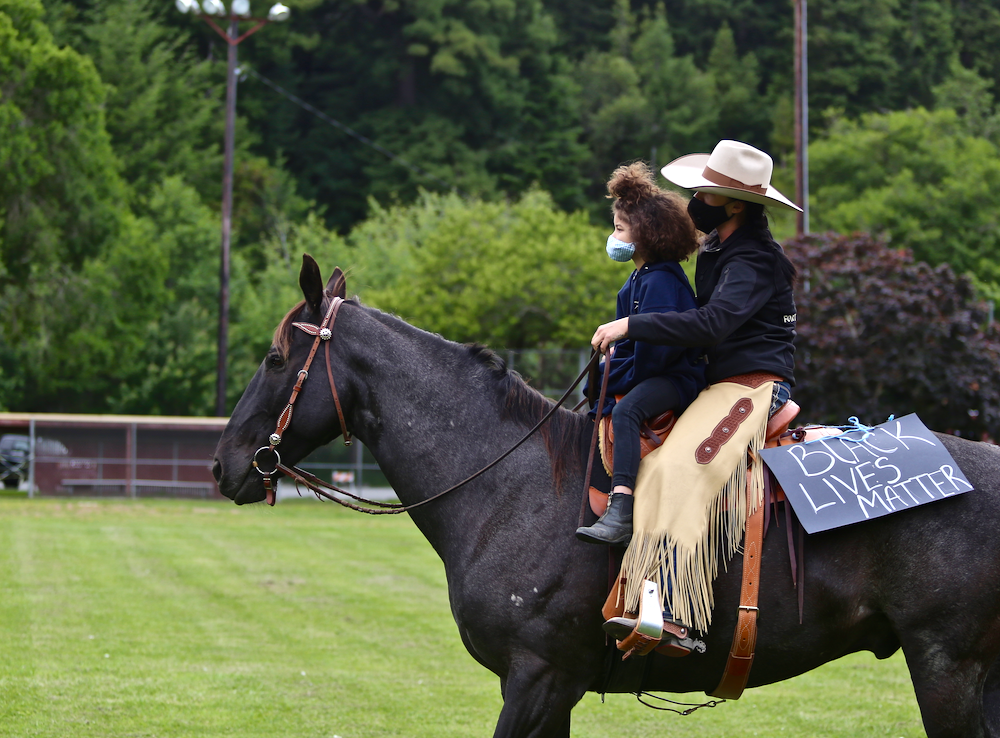 Savannah McCarty of Wild Souls Ranch attended the event with her team of humans and horses. 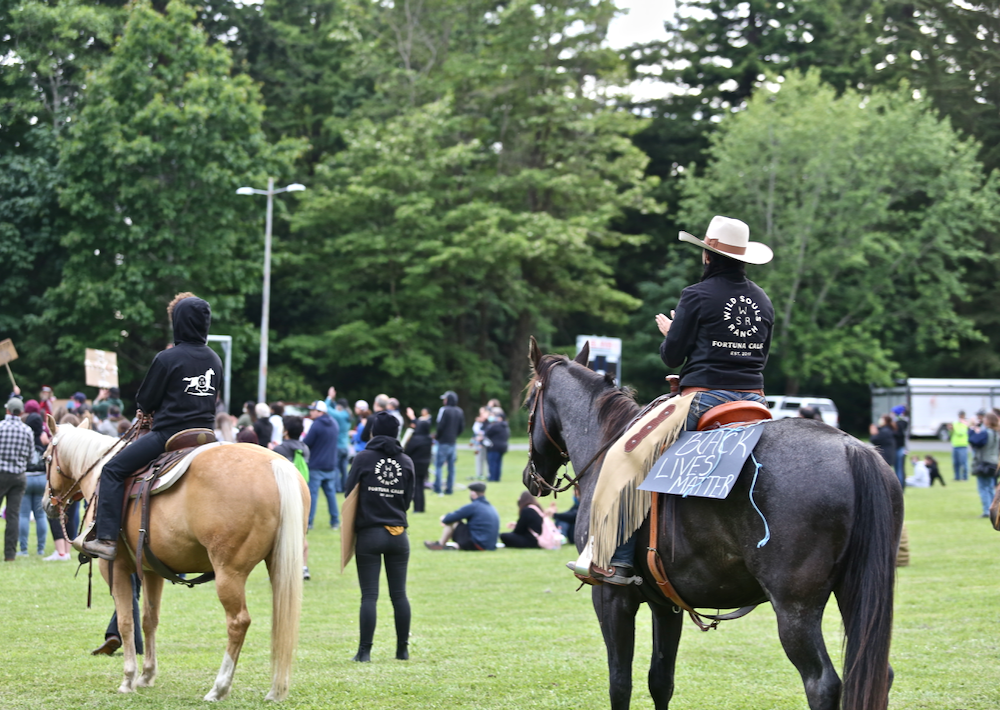 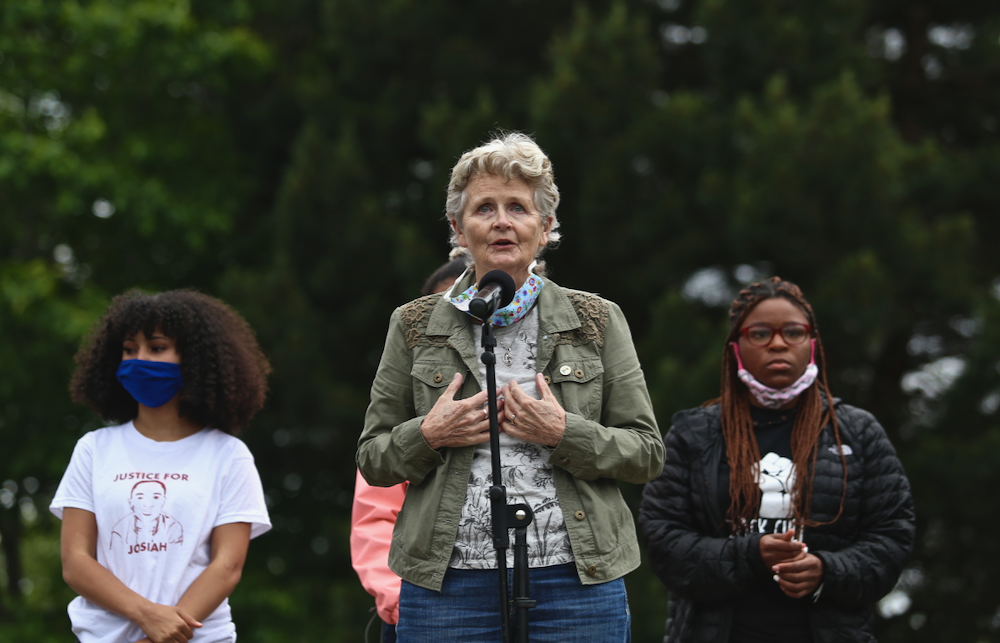 “I don’t think I’ve felt this good in a long time,” said Humboldt County 2nd District Supervisor Estelle Fennell before praising the bravery of the event’s organizers and Mayor Long. “Your cause, our cause is righteous. Let’s just carry it on. Let’s take this moment, let’s grow with it. Let’s make it work. Let’s make it count.” 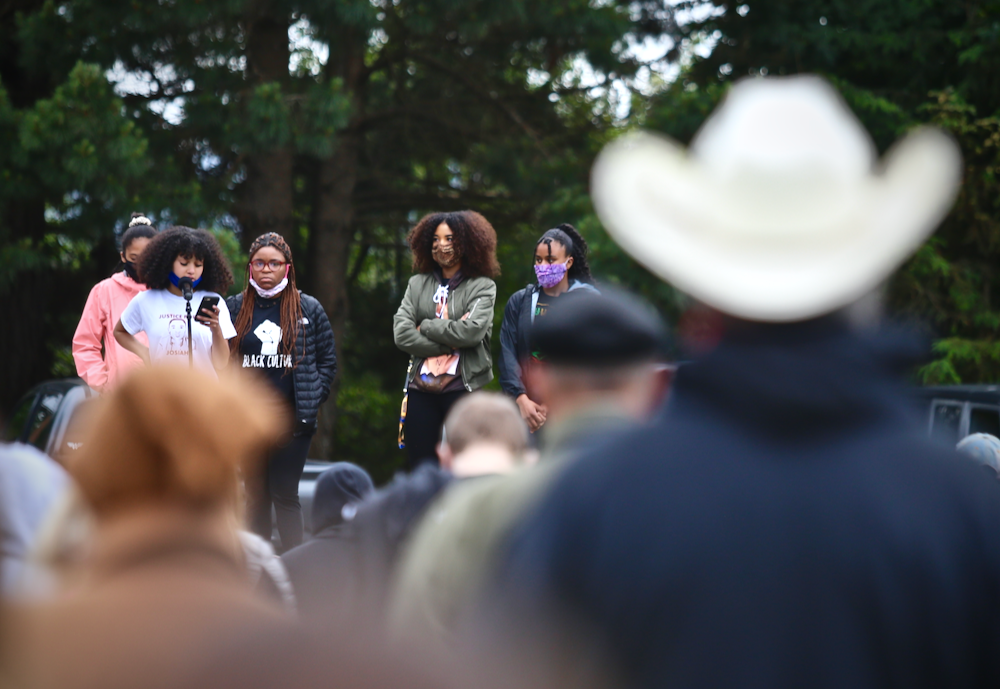 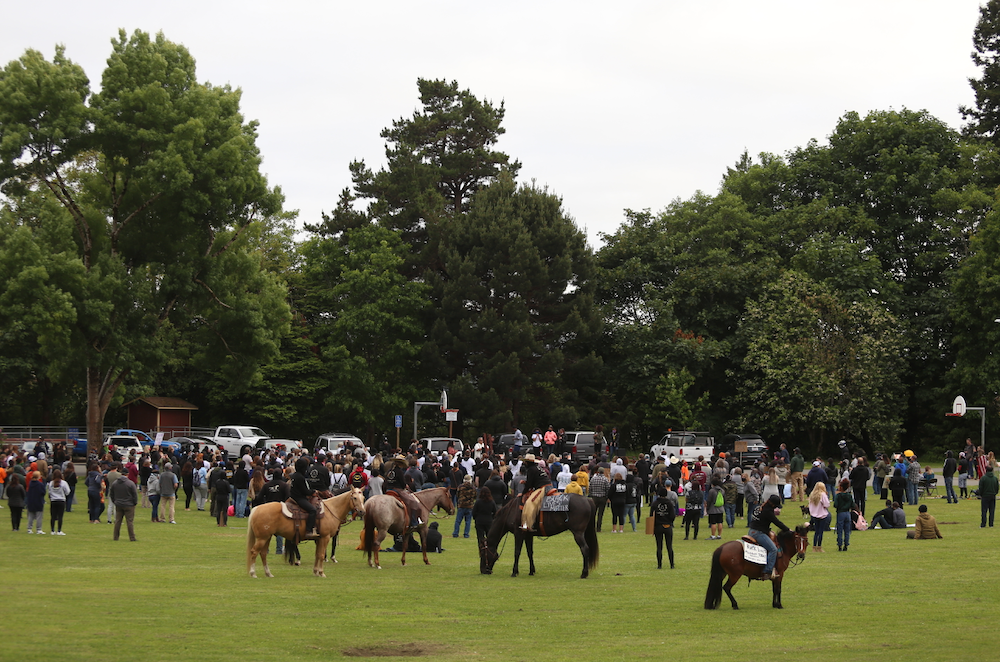