« DRIVE-THRU FLU SHOTS! If You Haven’t Gotten Your Jab Yet, the County Will Set You Up For Free Wednesday 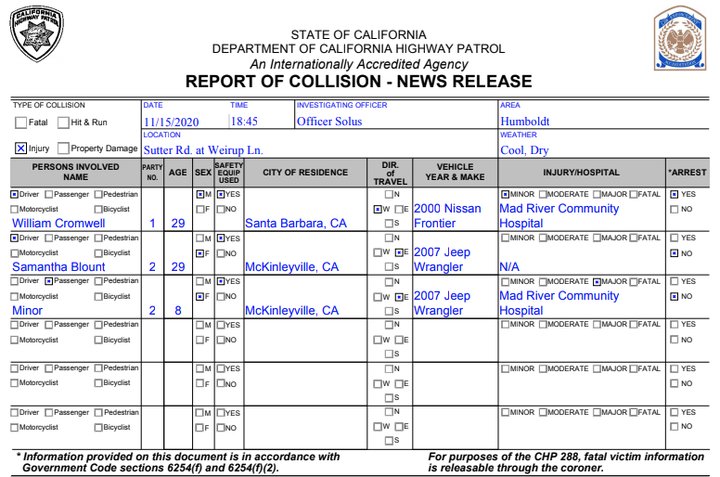 On 11/15/2020, at approximately 6:45 p.m., the Humboldt Area CHP received a report of a head-on collision on Sutter Road at Weirup Lane in McKinleyville.

A preliminary investigation by CHP determined that a 2000 Nissan Frontier, being driven by 29-year-old William Cromwell of Santa Barbara, CA, was traveling westbound on Sutter Road, approaching Weirup Lane. A 2007 Jeep Wrangler, being driven by 29-year-old Samantha Blount of McKinleyville, was traveling eastbound on Sutter Rd., approaching Weirup Lane. Mr. Cromwell allowed his truck to travel into the eastbound lane of Sutter Rd. and collided head-on with the Jeep.

It was initially believed that an 8-year-old female passenger in the Jeep suffered minor injuries and medical treatment was declined at the scene. However, the passenger was later taken to the hospital where it was determined she suffered a serious internal injury as a result of the collision and was transported out of the area for further treatment.

Impairment is considered a factor in this collision. Mr. Cromwell was arrested for Felony DUI and, after being medically cleared at the hospital, he was booked into the Humboldt County Jail. The CHP Humboldt Area Office is continuing to investigate this collision and asks anyone who may have information to contact the office at 707-822-5981 or send an email to humboldt_area.humboldt_area@chp.ca.gov.