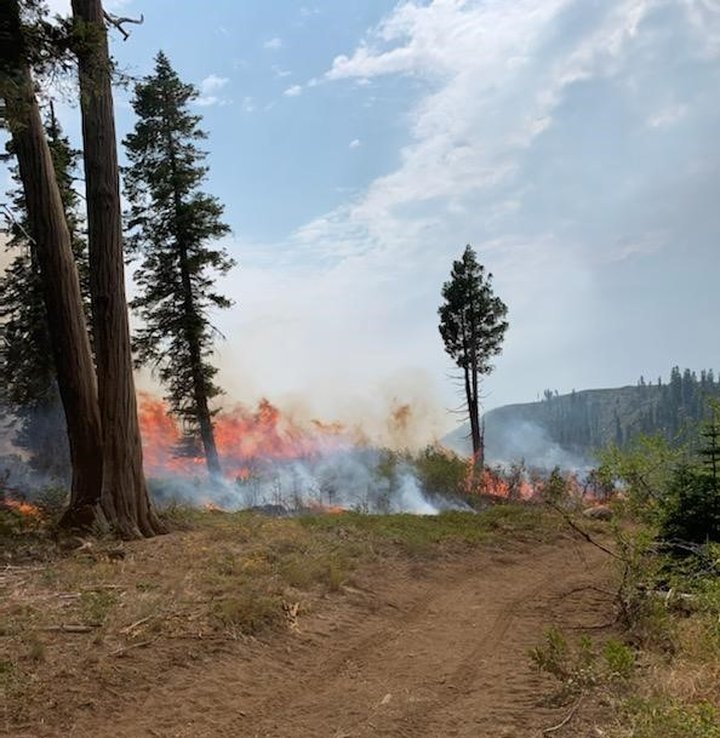 The Red and Salmon Fires are burning on the Klamath, Six Rivers, and Shasta-Trinity National Forests within Humboldt, Siskiyou, and Trinity Counties. The Hoopa Valley Tribe is now part of the joint delegation of authority with the three National Forests. The Great Basin Incident Management Team 5 transferred command to South Central Sierra Interagency Incident Management Team 14 at 0600 hours this morning. Team 14 will continue to work closely with the Yurok Tribe, the Karuk Tribe, and local community liaisons.

Current Situation: The inversion lifted slightly yesterday afternoon and the southeastern portion of the fire in One Mile Creek became active. Dozers continued to clear line in the southwest area of the fire, largely by reopening existing lines from previous fires. Crews continued to conduct firing operations along the 10N02 Road, around Bear Creek camp and Pack Saddle Ridge to create a buffer and strengthening the road as a containment line. The southwest corner of the fire stayed north of Tish Tang Creek, holding along Tish Tang Ridge. Firefighters continued to patrol the northeast portion of the fire along Nordheimer Creek and China Creek.

Fire crew efforts will be focused today clearing dozer lines created during the Corral Fire of 2013, near the fire perimeter in the southwest area of the fire. Tactical firing operations continue along 10N02 Road, which serves as a primary line containing the fire east of the Hoopa Valley Reservation. Along the northwestern and northeastern flanks of the fire, crews will continue to patrol and mop-up further strengthening containment lines.

Weather: Hot and dry conditions continue to increase, leading to low relative humidity and critically dry fuels. Light and variable winds with gusts up to 12 mph becoming westerly as the day progresses. Late Monday night and into Tuesday, a dry cold front will move into the area from the North and East, producing critical fire weather conditions with an East wind over the fire area. A Red Flag Warning is effect from Monday night ay 10 p.m. until Wednesday morning at 8 a.m.

Air Quality: Heavy smoke from the Red Salmon Complex has combined with smoke from several other fires impacting Northern California and Southwestern Oregon. Northwest winds today will improve air quality in some areas North and West of the fire, including Etna, Scott Valley and Shasta Valley. However, areas of heavy low lying smoke in the Willow Creek, Hoopa Valley and Orleans will remain with moderate to heavy smoke throughout the day, with some improvement anticipated this evening. Unhealthy air conditions are expected to persist in Forks of Salmon, with moderate conditions which may worsen tomorrow along the coast.

National Forest Closure Areas: The Red Salmon Fire Forest Closure Area became effective on August 8, 2020 under Forest Supervisor’s orders on the Klamath, Shasta-Trinity, and Six Rivers National Forests. As hunting seasons open, hunters are reminded the closure is in place for their safety as well as the safety of firefighters. Complete closure information is available on InciWeb for the Red Salmon Complex. For up to date fire information on the Red Salmon Complex and other fires visit https://inciweb.nwcg.gov/ or use the QR code to view the links with your mobile device.