If Newsom Is Recalled, How Would a Republican Governor Get Anything Done? » 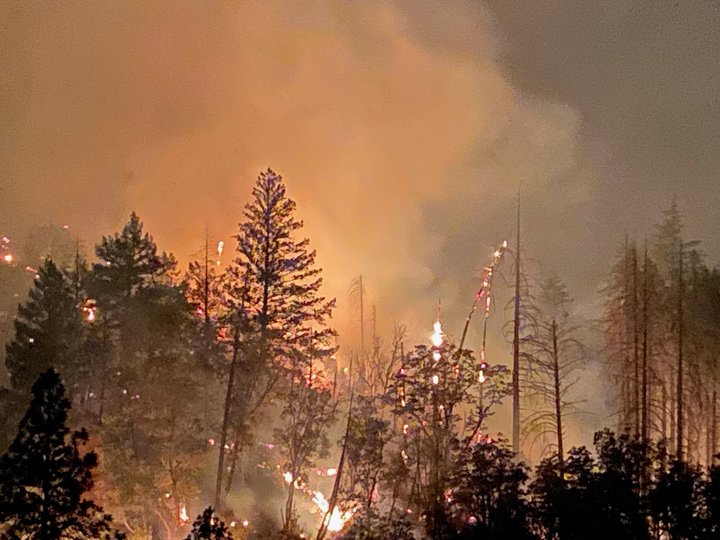 The Monument Fire burning along highway 299 in Trinity County between Burnt Ranch and Weaverville is now 163,155 acres in size and now 23 percent contained

“Weather conditions are not expected to be quite as intense but severe enough that fire managers expect another uptick in activity again later today,” the fire’s incident management team stated this morning. “While yesterday’s growth was largely confined to wilderness and unpopulated terrain, the fire still retains lots of potential to move toward populated areas. To protect those areas the emphasis today will continue to be the construction and strengthening of primary, alternate and contingency fire lines.”

Evacuation Orders: In effect for Barker Mountain, the northwest portion of Hayfork Summit and North Hayfork Valley, north of Highway 3.

The McFarland Fire burning along Highway 36 in Trinity County is now 122,653 acres in size and 93 percent contained.

One month after the fire ignited due to lightning, a team of 310 firefighters are wrapping up work on the blaze. Equipment is reportedly being hauled out of the area and firefighters are mostly performing mop-up duty along containment lines.

“Overnight, crews worked in the Beegum Gorge area to continue the progress,” the fire’s incident management team stated this morning. “Smoldering stump holes and large dead down trees continue to burn out within the perimeter. Limited fire behavior is expected on the incident today. Hot, dry and windy weather could cause a general increase in fire activity as unburned interior fuels within the containment line continue to burn.”

All mandatory Evacuation Orders and Warnings have been lifted. Highway 36 has been reopened to both directions of traffic. Some stretches of the highway are still reduced to one-way traffic control due to unrelated maintenance work.

The McCash Fire burning east of Highway 96 in the Klamath National Forest has grown to 31,721 acres and remains 1 percent contained.

A team of 401 firefighters is actively working to contain the fire, including six crews, 12 engines, five dozers six water tenders and three aircraft.

“The McCash Fire was active on all fronts Saturday,” the fire’s incident management team stated this morning. “It crossed to the north side of King Creek and has begun backing down toward Independence Creek. The fire is also moving west toward Highway 96 near the boundary between the Happy Camp Ranger District and Ukonom Ranger District.”

Highway 96 remains open to both directions of traffic.

For the latest evacuation information use the Siskiyou County Evacuation Map.

Smoke from the McCash Fire and the Klamath River, looking south from Highway 96 on Wednesday. | Inciweb