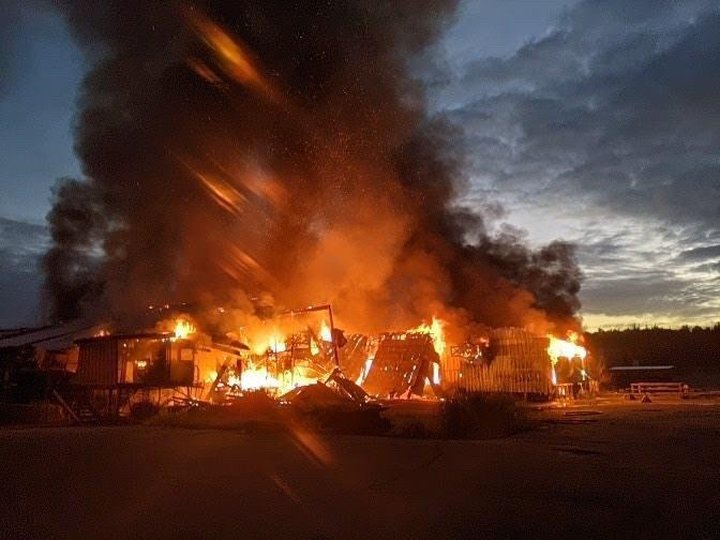 The fire that destroyed a portion of the abandoned Manila Sawmill on the 2500 block of New Navy Base Road last night was likely sparked by smoking transients, Arcata Fire District Chief Sean Campbell told the Outpost today.

“There were a couple of transients seen about an hour before the fire at the south end of the old sawmill,” Campbell said.

A chunk of the pitch. | Photo by Chief Sean Campbell.

The severity of the fire was likely fueled by mounds of pitch, a crystalized form of sap, mixed in with years of sawdust still piled up on the mill floor.

“The amount of fire we had was mind boggling,” Campbell said. “I couldn’t figure out what was burning.”

It wasn’t until this morning that firefighters discovered the pitch.

“Things I thought were giant blocks of concrete last night were giant chunks, 3 to 4 feet thick, of this pitch,” he said. “It smells like a Christmas tree.”

“We were spraying 6,000 gallons of water a minute on that fire and firefighters were crawling around in knee-deep water,” Campbell said. “I found one section of water this morning that was still 8 feet deep. There was a giant electrical box that was hanging from the ceiling by 1-inch conduit. That’s, the kind of thing firefighters were dealing with last night.”

Despite the hazards, no firefighters were injured battling the fire.

Campbell estimates that the building suffered $125,000 in damages and that $550,000 worth of property was saved. Firefighters will remain on scene as smoldering continues to be a concern due to the piles of pitch and impending winds.

A fire erupted at the old Sierra Pacific Mill along Highway 255 in Manila yesterday evening.

North Coast News reported last night that the structure is a complete loss.

The mill has sat abandoned since Sierra Pacific Industries announced its closure in January of 2016.

The fire is currently under investigation. The Outpost attempted to contact AFD Chief Sean Campbell this morning for more information, but he is currently at the scene of the fire.

More information will be provided when it is available.