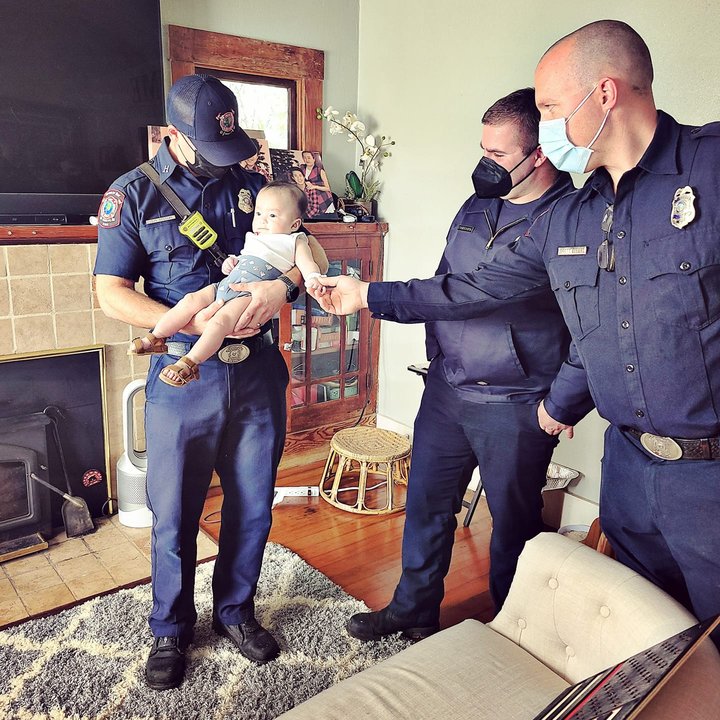 On Christmas Eve night, while many of us were resting with holiday anticipation, the crew of Engine 8113 got the worst call a firefighter can get – report of unconscious infant, not breathing.

The call came in one minute past 11:00 p.m. on December 24, 2020, and the crew arrived at scene within 3 minutes of the initial dispatch. Engineer Brett Egbert, responsible for driving Engine 8113 to the incident, recalls having just studied that particular section of city maps that same day in a strange coincidence that felt “meant to be.”

Once inside, the crew found seven-month-old baby boy Phoenix lying on the ground pale, not breathing and without a pulse. The crew immediately began performing CPR, administering oxygen, and preparing the cardiac monitor, an advanced life support tool, for defibrillation. Moments thereafter, the monitor delivered its first shock to baby Phoenix’ heart. With no improvement in conditions after the first shock was administered, Fire Captain and Paramedic John Goodman began Advanced Life Support measures including the administration of life-saving medications on scene. All the while, Firefighter Logan Bongio and Engineer Egbert continued CPR, sustaining baby Phoenix’ heartbeat and breathing while he was unable to do so for himself.

After arriving at the hospital, Fire Captain / Paramedic Goodman continued CPR with Emergency Department staff for approximately 5 minutes before, miraculously, baby Pheonix’ heart rate stabilized and he once again had a pulse. In a huge sigh of relief, baby Phoenix was handed over to hospital staff, who took over his care. Once the hospital confirmed baby Phoenix was stable, the crew of Engine 8113 left the hospital, and returned to their station- forever changed by the events of a Christmas Eve they would never forget.

This story is shared with the permission and enthusiasm of baby Phoenix’ family. We are happy to report that, after receiving specialized care for some time in San Francisco, baby Phoenix has returned home to his family in Eureka.