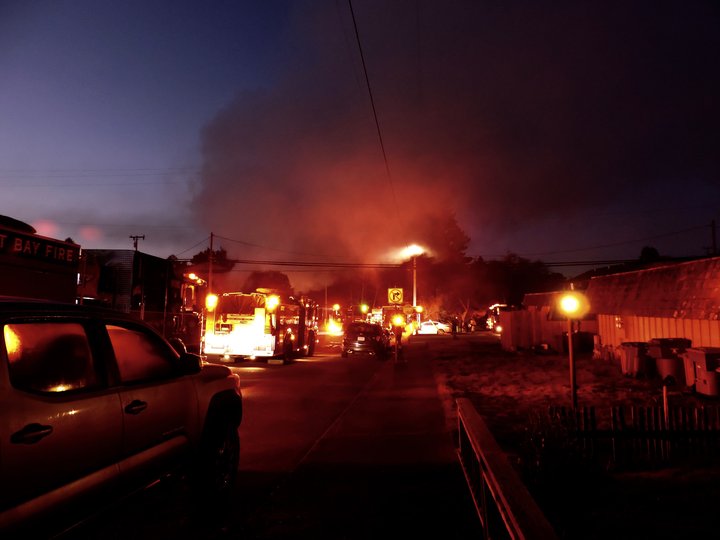 A reader submitted photo of one of the fires.

The fire was controlled in 30 minutes and the fire did not extend into the apartment units directly above the carport but the carport sustained heavy fire damage and both vehicles were a total loss.

While on scene of the initial fire, Humboldt Bay Fire was notified of a second vehicle fire in the 100 block of Grotto St, two blocks away. The fire was isolated to a tire on the vehicle and was quickly extinguished by an EPD officer and Humboldt Bay Fire requested a second alarm due to the suspicious nature of the fires and the potential for further fires.

Approximately five minutes later Humboldt Bay Fire was notified of a third vehicle fire in the alley to the rear of the 2800 block of C St.

Two engines cleared from the first fire and responded to find a fully involved pick-up truck next to multiple residences. The fire was quickly extinguished with no extension to any buildings and the pick-up truck was a total loss.

Given the suspicious nature and timing of the three fires, EPD and Humboldt Bay Fire began searching the area and EPD quickly detained a suspect in the 100 block of Grotto St. shortly after the third fire was extinguished.

The total loss from the 3 fires is estimated at $125,000 and there were no civilian or Firefighter injuries.

Fire Investigators from Humboldt Bay Fire are currently working together with detectives from EPD to process the fire scenes and gather evidence.