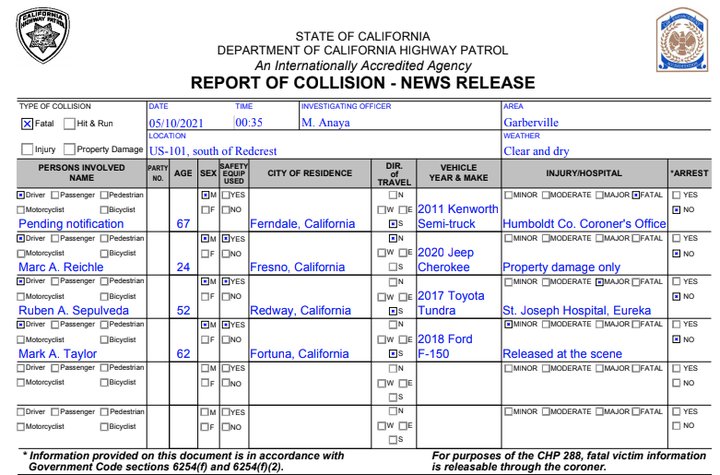 On May 10, 2021, at 12:35 a.m., a large tree fell across US-101, south of Redcrest, blocking the northbound and southbound traffic lanes that resulted in a series of traffic collisions minutes apart.

A white 2011 Kenworth semi-truck pulling an empty milk tank trailer was traveling southbound on US-101 within the right lane when it collided head-on into the tree. The semi-truck crossed the northbound traffic lanes and drove off the east roadway edge where it came to rest down an embankment.

The driver of the semi-truck was pronounced deceased at the scene.  A red 2020 Jeep Cherokee driven by Marc Alexander Reichle of Fresno was traveling northbound on US-101 when the Jeep collided head-on into the tree and came to rest within the northbound traffic lanes.

Mr. Reichle was uninjured. Minutes later, a white 2017 Toyota Tundra driven by Ruben Anthony Sepulveda of Redway was traveling southbound on US-101 when it collided head-on into the tree and came to rest within the southbound traffic lanes.

Just after the Toyota came to rest, a 2018 Ford F-150 driven by Mark Allen Taylor of Fortuna was traveling southbound on US-101 when it collided head-on into the tree and then collided into the Ford before coming to rest on its side. Mr. Sepulveda was transported to St. Joseph Hospital in Eureka with major injuries and Mr. Taylor sustained minor injuries.

The CHP Garberville Area is investigating this traffic collision.