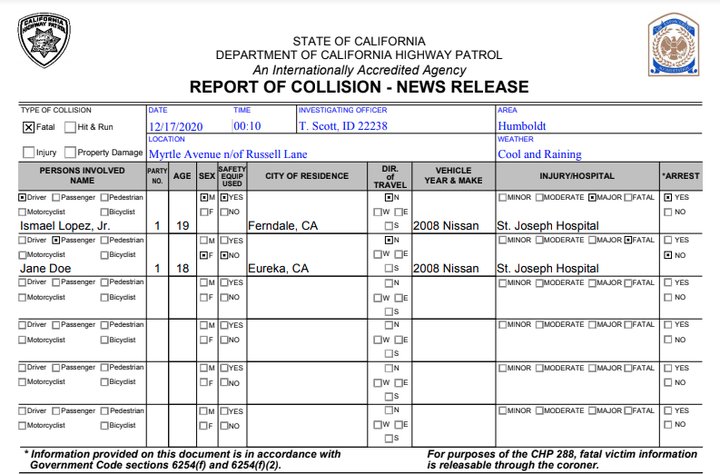 On 12/17/2020, at approximately 12:17 a.m., the CHP Humboldt Communication Center (HCC) dispatched Humboldt Area CHP to a vehicle collision with an ambulance responding near Myrtle Avenue and Russell Lane.

Humboldt Bay Fire Department, City Ambulance, and CHP Officers responded to the scene and located a 2008 Nissan Altima that had collided with two parked vehicles.

The driver, Ismael Lopez, Jr. and passenger, Jane Doe, were transported to St. Joseph Hospital for treatment. Despite the valiant efforts of Fire, Ambulance, and Hospital personnel, Jane Doe unfortunately succumbed to her injuries at 2:36 a.m. The identification of the passenger is being withheld pending notification of next of kin by the Humboldt County Coroner’s office.

The CHP is continuing to investigate this collision and asks anyone with information to contact the Humboldt Area CHP office at (707) 822-5981.

At least one person was reportedly killed in a fiery crash in Myretletown today at approximately 12:14 a.m.

According the California Highway Patrol incident report, the vehicle crashed into either a van, a passenger bus or a power pole  near the intersection of Myrtle Avenue and Russell Lane before exploding into flames.

The Outpost has contacted the CHP for more information on the crash, but has not immediately received a response.