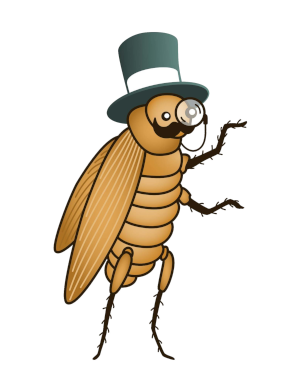 “Wow! Roachy can see himself in your butterknives! Way to go, Zane Junior High School!!”

“Humboldt foodies rejoice! Our reports show that Zane Junior High School knows how to get you fed in a sanitary manner. Now that's nummy!!”

“Zero violations! Now that's how you keep 'em coming back for more! I'll be sending all my human friends to Zane Junior High School! Yum yum!!”

“Potentinally hazardous food that is cooked, cooled, and reheated for hot holding shall be heated to a temperature of 165F for 15 seconds. Cooked and refrigerated food that is prepared for immediate service in response to an individual consumer order may be served at any temperature. Reheating for hot holding shall be done rapidly, and the time between 41F and 165F shall not exceed two hours. Potentinally hazardous food reheated in a microwave oven for hot holding shall be rotated or stirred midway during cooking, covered to retain surface moisture, be reheated to 165F in all parts of the food, and stand covered for at least two minutes after reheating. Ready-to-eat food taken from a commercailly processed hermetically sealed container or from an intact package from a food processing plant shall be heated to a temperature of 135F for hot holding. (114014, 114016)”