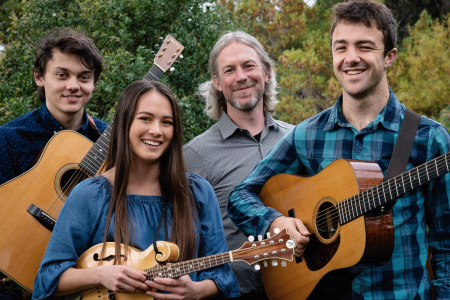 December 6th, 2019 Doors at 7:30 p.m., show starts at 8:00 p.m. $10 - $25 sliding scale Freshgrass 2019 Band Contest Winner, IBMA 2019 Momentum Vocalist of the Year, 2nd Place at the 2019 Winfield Guitar Competition, and numerous awards in Northern California illustrate the kind of recognition this bluegrass/americana band has been getting recently. Headed by singer, songwriter, and mandolinist AJ Lee, the band has been deeply involved in the California bluegrass scene since they were toddlers, and since then have developed their sound and added influences outside of bluegrass, including swing, folk, blues, jazz, country, soul, and rock. Since their formation in 2016, they have performed all around the country as well as in the UK, Ireland, and France. This year, 2019, they came out with their first album, “Like I Used To,” which consists entirely of AJ’s original songs. The rest of the band includes Sullivan Tuttle and Jesse Fichman on acoustic guitar, Chad Bowen on standup bass, and Jan Purat on fiddle.