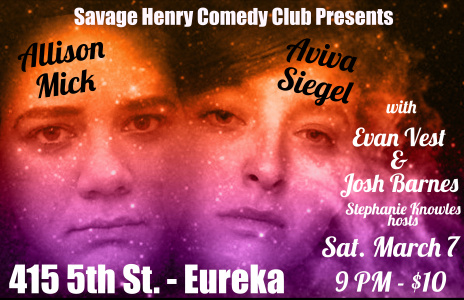 Allison Mick is an Oakland-based comedian and writer originally from Rochester, NY. She draws from her upbringing and personal experiences to address topics like race, gender, and serial killers. Allison is a contributing writer for The Hard Times, Macaulay Culkin’s BunnyEars.com, and has had work featured on HuffPo. She’s performed at SF Sketchfest, Out of Bounds Fest, and Bird City Comedy Festival. In 1997, she was featured in the book “Humor Works” by Dr. John Morreall, the founder of the International Society for Humor Studies and has managed to stay very grounded despite this wild literary fame. Aviva is a stand-up comic by day, and a stand-up comic by night. Her jokes are silly (clown horn sound) yet personal (awooga), and she really just wants to have fun up there. She’s been nominated as one of the “Best Comedians in the Bay” by the East Bay Express, and owns a “Best Actress” trophy that she bought for herself. Her comedy’s been featured in SF Sketchfest, The All Jane Comedy Festival, The Asheville Comedy Festival, Out of Bounds Comedy Festival, UCB Comedy Originals, and Heeb Magazine. Evan Vest and Josh Barnes open. Stephanie Knowles hosts. $10