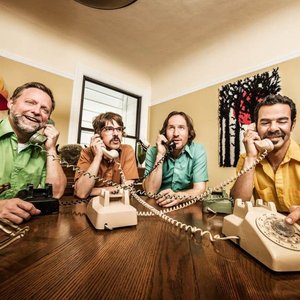 ALO is more than a band. It’s a musical relationship that has endured for over two decades, with band members playing in numerous projects together and apart. Following the 2012 release of their freewheeling Sounds Like This, the band took time off to work on various side projects. Zach Gill (keys/vocals) toured the world with the band’s college pal Jack Johnson; Dan “Lebo” Lebowitz (guitar/vocals) played shows with the Grateful Dead’s Phil Lesh; Steve Adams (bass/vocals) toured and recorded with Nicki Bluhm & the Gramblers; Dave Brogan (drums/vocals) joined up with Utah band, Mokie. These and other endeavors have influenced the band’s new album Tangle Of Time.

More than previous releases, Tangle Of Time really taps into what makes ALO unique. It’s that special blend of classic songwriting and the ability to stretch out jams and distill dance floor grooves. It’s heartfelt lyrics that make you smile, reflect and just want to sing along either way. It’s four great musicians who all write and sing. And four friends who’ve been through a lot together and still support, challenge and inspire one another.

Entering Allegiant Records in San Anselmo, California this past January with co-producer Dave Simon-Baker, the four members decided they’d take a different recording approach. Instead of spending pre-production days jamming and co-writing, each member brought in their own demos, roughly three dozen in total, for the group to listen to, pick apart and eventually whittle down to the 11 songs that make up Tangle Of Time. Once they narrowed their focus, they turned their attention to arrangements and production techniques. Songs were tightened up, layers made more experimental and the end results validated their new approach.

Lebo described the shared respect and admiration the band felt during the recording process this way: “There are four strong opinions in the room, but playing together for so long we’ve all become pretty good at the empathy thing at this point; we can be very Zen about it. We truly value being together at this point in our careers, and whatever we get from our solo and side gigs, no matter how much fun we have, it’s not this.”

That sort of maturity, the ability to take stock of your friends, loved ones, and collaborators, and truly appreciate them is certainly one of the cornerstones of Tangle Of Time. Lebo, Adams and Gill first started playing music together in middle school, and then with Brogan right after college. Somehow, these relationships have lasted, evolved and been made stronger every year. One can almost hear the group releasing a satisfied existential sigh throughout the album, finding acceptance, love and contentment with the world they’ve built.

“I really appreciate the guys right now, more so than ever,” Gill shared, excitedly adding, “Years ago the feeling was, ‘I wanna get to my songs and see how they sound while we’re all here’, whereas now I’m rooting for everyone else’s songs. It’s great.”

That approach of supporting each other’s songs worked like a charm, capturing each member’s distinct songwriting voice, while simultaneously expanding the notion of what an ALO song or album can be. Take for instance the one-two-punch of the synth-filled, spacey jam vehicle “The Ticket” and the pedal steel-driven easy-going happiness of “Simple Times”. Although two ends of the sonic spectrum, both are classic Gill songs at their core but stretched wide and far by the band’s collective effort.