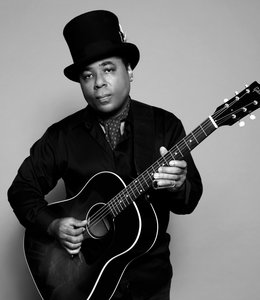 The King of New Orleans Blues Born in 1962, guitarist Chris Thomas King became the last major folk blues discovery of the 20th Century when he was discovered in Louisiana in 1979 by a folklorist from the Smithsonian Institute in Washington D. C. He was introduced to the world the following year by venerable folk label Arhoolie Records as an authentic folk blues successor to Huddie Ledbetter, Muddy Waters, Mississippi John Hurt and Manse Lipscomb. King was chosen by the Coen brothers to play the role of itinerant bluesman Tommy Johnson along side George Clooney in the movie “O Brother, Where Art Thou? (2000).” Larger than life on the silver screen, Chris Thomas King, acoustic guitar in hand, captivated audiences the world over, silencing his critics. His authenticity as a folk blues artist, by any measure, proved to be undeniable. A star of stage and screen was born. New fans the world over packed sold out theaters and art centers to immerse themselves in his illuminating melodious glow. King sold millions of records and won numerous awards, superseding the success of his folk blues predecessors.