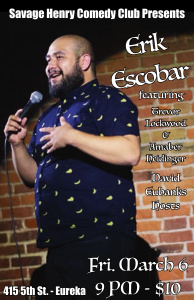 Described as hilariously witty by most and “trouble maker” by his 4th grade teacher, Erik Escobar is a comedian that performs all throughout the US at clubs, colleges, and festivals both independently, as a part of the Almost Asian Comedy Tour, and opening for acts such as WWE’s Rob Van Dam and Seinfeld’s Jerry Seinfeld. With a style adaptable to colleges, corporate events, comedy clubs, roasts, or whatever you might need to tailor something for, Erik is your guy if you and your event wants to laugh. Credits include NBC’s Last Comic Standing, VH1, Comedy Central, Buzzfeed, and the upcoming feature film, Josh and the Sound Gig. Amaber Heidinger and Trevor Lockwood open. David Eubanks hosts. $10