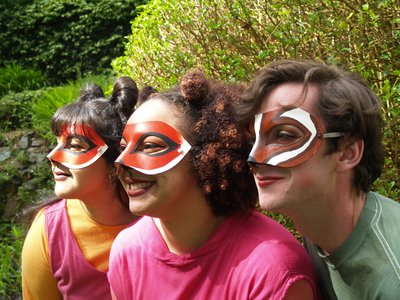 Dahl’s much-loved story follows the vain attempts of three farmers—Boggis, Bunce, and Bean, one fat, one short, one lean—to get rid of the fox who regularly steals food from their farms. They try to kill him by any means possible. Outwitted at every turn, the farmer’s ploys backfire. The fantastic Mr. Fox devises a plan which will ensure full stomachs for not only his family, but all his friends, who celebrate with a sumptuous feast.

David Wood’s adaptation of the book was first performed at the Belgrade Theatre in England in 2001. Wood, an actor, composer, producer, director, magician, and playwright, created the popular animated children’s television series The Gingerbread Man. Wood has adapted other books by Dahl including The BFG, The Twits, and The Witches.

Roald Dahl was a British novelist, short story writer, poet, screenwriter, and fighter pilot. His books have sold more than 250 million copies worldwide. Dahl’s short stories are known for their unexpected endings, and his children’s books for their unsentimental, macabre, often darkly comic mood, featuring villainous adult enemies of the child characters. His books champion the kindhearted, and feature an underlying warm sentiment. Dahl’s works for children include James and the Giant Peach, Charlie and the Chocolate Factory, and Matilda. His adult works include Tales of the Unexpected.
_
The production is directed by Troy Lescher, Assistant Professor in the Department of Theatre, Film & Dance.

“From an educator perspective, it is always important to me that a script offers our students valuable and extraordinary learning experiences, which Fantastic Mr. Fox certainly does,” Lescher says. “Although the Fantastic Mr. Fox script seems somewhat simple and concise on the surface, it actually poses some very complex challenges for student artists. The action of the play requires our designers to think creatively about how to overcome a variety of staging issues and obstacles. The play also pushes the actors to really stretch their characterization abilities while also demanding an immense level of energy at every performance.

“This show is absolutely suitable for all ages,” Lescher says. “It is particularly directed toward elementary-aged children but young adults and adults alike will find it just as enjoyable. There will be suspense, surprises, and celebration. There will also be physical comedy, puppetry, and audience participation.”

The production features a diverse cast of twelve HSU students. Scenic design is by Raymond Gutierrez, costume design by Sammi Stowe, lighting design by Percival Ferrugia, properties design by Lilliana Plascencia and mask and make-up design by Constance Hill. The production will be stage-managed by Bailie Molsberry.