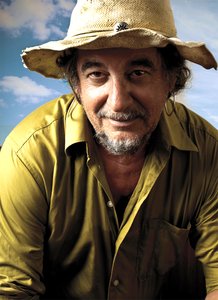 With roots in small town Iowa, Greg Brown’s rich folk style is heavily influenced by his origins. His mother played electric guitar, his grandfather was a banjo player and his father was a holy roller preacher. Brown’s songwriting has been lauded by many, and his songs have been covered by Willie Nelson, Carlos Santana, Joan Baez, Mary Chapin Carpenter and more. At the personal request of Jeff Bridges, Brown also contributed songs for Bridges’ Oscar-Winning role in the film Crazy Heart. Ultimately, brown is a storyteller who moves his audiences with his warmth, humor and deeply human musical vision.