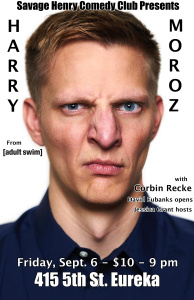 A product of Michigan’s fine culture, Harry came up in the Detroit comedy scene in the late 2000s and now resides in LA. He’s performed in Riot LA, SF Sketchfest, Desert Heartsl, Gilda’s LaughFest, Laughing Skull, Laugh Your Asheville Off, and Beast Village (amongst others). Harry runs Crane’s Comedy Night in Los Angeles and also hosts a monthly showcase at the Dirt Pit Lounge. He frequently tours throughout the US and Canada. Currently with Cartoon Network, Harry’s work has appeared on Adult Swim, and his voice can be heard in YouTube Red’s “Do You Want To See a Dead Body?” and LOL Network’s “Campus Law”. He was featured as the villainous Pie Guy in the web series “An Afternoon”, and was a man amongst children portraying Phillip, 14 year-old unicycle prodigy, on season 3 of Disney’s “A.N.T. Farm”. Corbin Recke features. David Eubanks opens. Jessica Grant hosts. $10