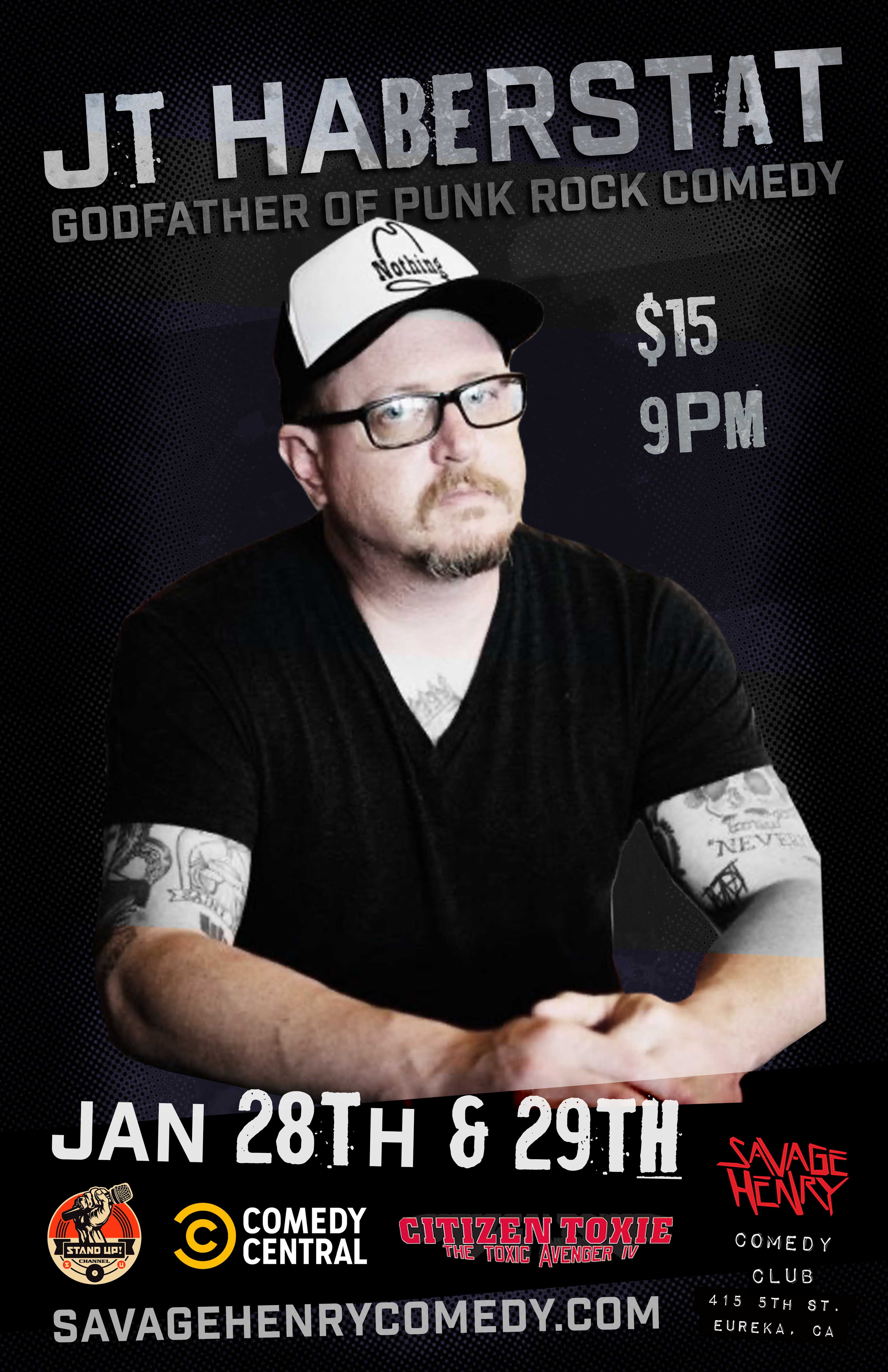 At once both observational and bitingly sardonic, and deemed the ‘Godfather of Punk Rock Comedy’ by ‘Chicago Now’, JT Habersaat has headlined the groundbreaking Altercation Comedy Tour for over a decade. Recently named one of the Interrobang’s ‘Next Big Thing Comics’, JT currently hosts the twice-monthly livestream talk show ‘The Road Live’ for the Next Week Rocks platform, which has featured guests such as Brian Posehn, Lydia Lunch, Doug Stanhope, Tom Rhodes, Joanna Angel, David Yow, Kyle Kinane, Chad Daniels and dozens more. JT has consistently performed at legendary venues such as The Comedy Store, Hollywood Improv, City Winery NYC and Dynasty Typewriter LA. 2021 will see JT embarking on some long-awaited new national tour dates alongside fellow comic Eddie Pepitone, picking up where the duo were sidelined due to the 2020 Covid disaster, with JT slated to tape a new album for 800 Pound Gorilla Records / Warner Music Group by the end of the year. JT also curates the annual Altercation Comedy Festival in Austin, Texas, recently hailed by New York Magazine’s Vulture.com as one of their ‘Top Comedy Festivals in the World’. JT has released a number of albums on the Grammy-winning imprint Stand Up! Records, including his most recent one-hour special ‘MISANTHROPE’ which shot to #2 on the iTunes top 200 comedy charts. JT is a frequent guest on the Doug Stanhope Podcast, has appeared on Comedy Central’s sketch program ‘The Upright Citizen’s Brigade’, and acted in the cult Troma Films hit ‘Toxic Avenger 4’. JT has also provided direct support for numerous punk and metal bands, including Off With Their Heads, Riverboat Gamblers, The Sword and The Dwarves, and his material can be heard in consistent rotation on national platforms such as Today’s Comedy Radio and XM. JT is a frequent festival headliner, having in recent years performed on Pouzza Fest Montreal, Akumal Comedy Festival Mexico, Bird City Comedy Fest Arizona, The Fest Florida, Punk Rock Bowling Fest Las Vegas, Fun Fun Fun Fest Texas and the nation-spanning VAN’S WARPED TOUR. A prolific writer, Habersaat’s most recent novel ‘Killing For A Living’ was released to much critical acclaim, and he is also the author of ‘The Altercation Archives’. When not on tour, JT creates one-off custom action figure art pieces under the banner JT Custom Toys. His work recently appeared at the summer curated gallery show of the Los Angeles-based Sugarmynt Gallery, where it sold on opening day. His art currently resides in the hands of such noted talent as Patton Oswalt, David Lynch, Raymond Pettibon and many more. JT enjoys bourbon, your pets, and long stretches of silence.