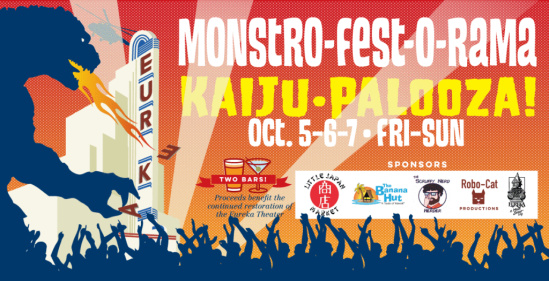 FRIDAY: The Eureka Theater’s 3-day Kaiju-palooza begins with the two granddaddies of them all, KING KONG (1933) and GODZILLA (aka GOJIRA) (1954)! Both are touching stories of small-island monsters who come to the big city and reach the top. From Skull Island to the Empire State Building, from Odo Island to Tokyo Tower, these two overachievers set the tone for decades of city-stompin’ mayhem.

Note: we will be screening the original Japanese version of GODZILLA, subtitled in English.

Doors open at 6:30, showtime at 7:00 for King Kong, approximately 9:00 for Godzilla. Tickets for the double feature are $10 all ages. Three-day festival passes (good for all 8 movies) also available at the door for $30.

MOTHRA (1961): Not gonna lie, folks, this one gets weird. Kaiju isn’t all about the big lizard–sometimes it involves miniature twin women, vampire plants, unscrupulous entertainment promoters, and the soul-obliterating terror that can only come from, um, a giant moth. Dubbed in English.

GODZILLA, MOTHRA, AND KING GHIDORAH: GIANT MONSTERS ALL-OUT ATTACK (2001): You want monsters? We’ll show ya monsters. GMKG has the big title three duking it out in, well, an all-out attack. Monster Baragon rounds out the cast. Dubbed in English.

GODZILLA 2000: No, this is not, repeat NOT the Matthew Broderick American abomination. It is 100% Japanese goodness. Well, except for the English dubbing, which frankly is what elevates this movie to greatness. Sharp-eared pop culture fans will recognize references from Dr. Strangelove to Superman.

SHIN GODZILLA (2016): a brilliant reboot of the Godzilla franchise. As Hiroshima and Nagasaki pervaded the original 1954 film, the Fukushima disaster pervades this latest Toho offering, darker and more serious in tone than any of its predecessors. But never fear, kaiju fans–there is plenty of awesome Godzilla mayhem. Japanese audio, subtitled in English.