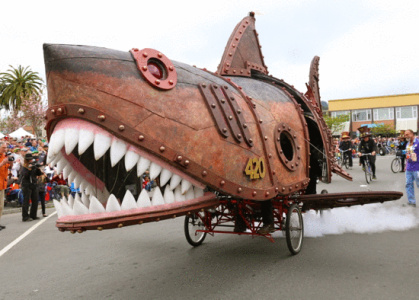 Day 1 of the Kinetic Grand Championship starts on the Plaza in Arcata, California at the noon whistle every Memorial Day weekend. The racers take off to the Manila dunes, where they race through miles of sand to the great and inevitable “Deadman’s Drop”. Then on to Eureka’s downtown gazebo.

Day 2 starts in Eureka at the waterfront on the Humboldt Bay, where brave Kinetic Pilots race their crafts through the water (most float). Then back on land where kinetic sculptures go up Hookton Hill, a 1 mile-7% incline and decline. Day 2 ends with a private campout for racers and volunteers only.

Day 3 starts from the private party at Crab Park where they will head over land to cross the Eel River just outside of Fernbridge. Watch the Racers cross the finish line on Ferndale’s historic Mainstreet, where they will park for a while before heading up to the Final Awards Dinner.