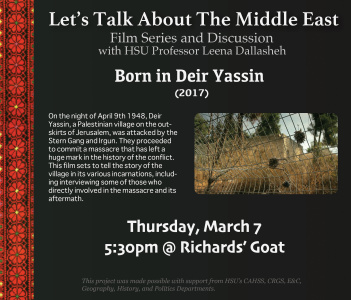 As part of the Let’s Talk About the Middle East film and discussion series, HSU History professor Dr. Leena Dallasheh hosts a screening of Born in Deir Yassin (2017). On the night of April 9th 1948, Deir Yassin, a Palestinian village on the outskirts of Jerusalem, was attacked by the Stern Gang and Irgun. They proceeded to commit a massacre that has left a huge mark in the history of the conflict. This film sets to tell the story of the village in its various incarnations, including interviewing some of those who directly involved in the massacre and its aftermath. The screening is free and open to the public.