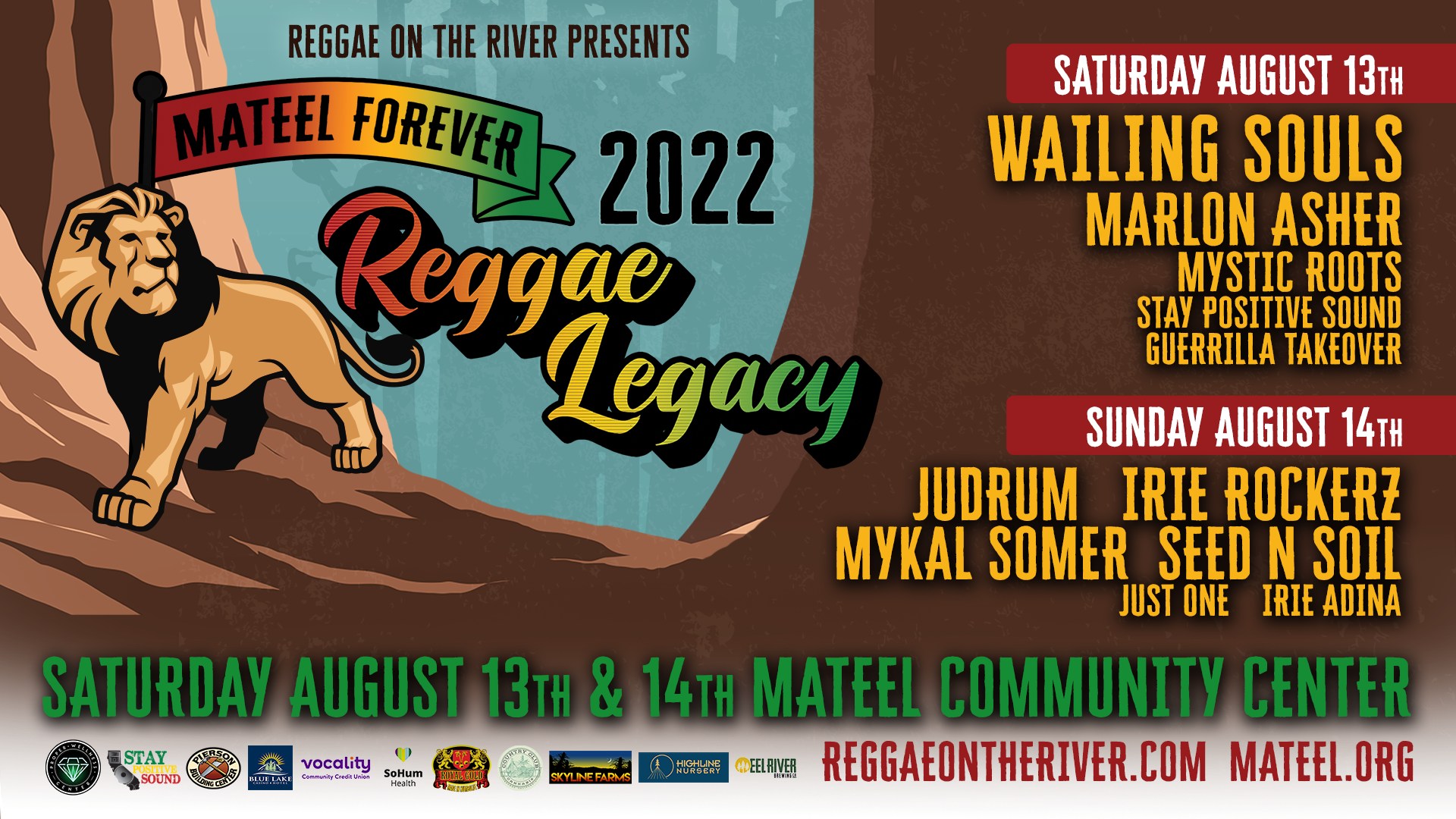 Reggae on the River presents: Mateel Forever: Reggae Legacy with the Wailing Souls, Marlon Asher & Mystic Roots. The event takes place Saturday August 13th & Sunday, August 14th at the Mateel Community Center, 59 Rusk Lane in Redway. Reggae Legacy honors the impact of the Reggae on the River festival has made both in Southern Humboldt County and on the global reggae scene for nearly four decades. Presented by the Mateel Community Center, the event is all ages, doors are at 5pm. Discounted tickets are on sale now for August 13th: $30 in advance through Eventbrite, tickets are $35 at the door. Tickets are $20 in advance for August 14th, $25 at the door, 2 day tickets on sale for $40. Children 12 and under admitted free. The event features food, vendors and a full bar serving those 21 and over. More information is available at mateel.org and reggaeontheriver.com.

About the Wailing Souls:

Fusing the harmonies of Motown with the roots and dancehall sounds of reggae, the Wailing Souls have ridden the crest of Jamaica’s music for more than four decades. Lloyd “Pipe” McDonald and Winston “Bread” Mathews as The Wailing Souls have been nominated for Grammy Awards on three occasions. The group scored hits with classic roots reggae tunes, War and Bredda Gravlicious, Firehouse Rock, and the 1992 SONY/BMG album and title track, All Over The World. The Wailing Souls were the first reggae group to appear on The Tonight Show during this period.
Additionally, the group scored number one hits with Things and Time, Jah Jah, Old Broom, and Shark Attack. The Wailing Souls’ recording career has been nothing short of historic. Vocally trained by Bob Marley and the Wailers’ teacher, Joe Higgs, they worked with legendary reggae producers including Coxsone Dodd of Studio One, Henry ‘Junjo’ Lawes, Channel One Studios, Delroy Wright, Lloyd ‘King’ Jammy’s, recording several early tunes at Bob Marley’s Tuff Gong Studio.

The Wailing Souls attracted global attention when their music was featured in the 1993 Disney film, Cool Runnings. The soundtrack album was an international hit, selling nearly half a million copies worldwide. The Souls had four songs on this soundtrack including the hit, Picky Picky Head. Formed in Trench Town, Kingston, Jamaica, in the late-1960s, The Wailing Souls have experienced numerous transformations. Their discography (over 26 albums to date) includes singles recorded as The Renegades, Pipe & the Pipers, and Atarra. Bread appeared in the documentary Marley on the life of Bob Marley, recounting several important aspects of this reggae icon’s life. Still one of the most powerful forces in Reggae, The Wailing Souls continue to tour globally and record new songs with the vigor that they had singing in Kingston’s Trench Town decades ago. The band has influenced the next generations of musicians playing reggae music, Sublime released the song “Pawn Shop” which was an interpolation of their original song “War Deh Round a John Shop”.

The Wailing Souls have performed at numerous festivals on some of the world’s most prestigious stages including the Rototom Sunsplash Festival in Spain and Reggae on the River in Humboldt County, California where they last appeared in 2018.

Marlon Asher is a reggae artist from Trinidad & Tobago. His breakout hit “Ganja Farmer” released in 2006 has become a worldwide, evergreen reggae classic featured widely on sound systems, by radio hosts and on playlists. Marlon has performed at several the top music festivals across the globe and has toured with Grammy Award winning artists: Shaggy, Beenie Man, Matisyahu and Slightly Stoopid.
Marlon Asher has collaborated on recordings with some of the biggest reggae artists & producers in the world

including Sizzla, Anthony B, Slightly Stoopid, Pressure Busspipe, Fortunate Youth, Kottonmouth Kings, Don Corleon & Teflon Zincfence. During the Covid 19 shutdown Marlon has been in the studio working on singles and his next album scheduled to be released in 2022. Throughout the pandemic he has performed on live streams and on drive in shows with the band Slightly Stoopid, who he also performed with at California Roots 2022.
About Mystic Roots:

Formed when the members met in Chico, California this 5-piece band plays originals with two feet solidly in Reggae and adding elements of Hiphop, Pop and Rock to the mix. The band is consistently sharpening their evolving musical arrangements of vocal harmonies and occasional beatboxing that are enhanced by the groups’ female/male dynamic. The group has been together longer than most other California Reggae bands and have helped to define the “West Coast Reggae” genre crisscrossing the U.S. appearing to a beloved fanbase. They’ve had over 4 million plays on their 2000 song “Pass The Marijuana”.