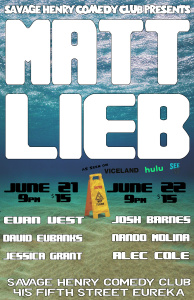 Matt Lieb is a comedian, writer, and actor from Los Angeles. As a stand up comedian in San Francisco, he was named one of the “2016 Best Comedians in the Bay Area” by SFist and has performed at the Bridgetown Comedy Festival 2017, SF Skecthfest 2013-2017, and the 10,000 Laughs Festival in Minneapolois. Matt’s comedy has been featured on VICELAND, Hulu, SeeSo, and Gabriel Iglesias’ “Stand Up Revolution Radio” on SiriusXM. Currently, Matt is a correspondent on Emmy Nominated short form series The Star Wars Show, a writer/performer on Newsbroke on AJ+, and staff writer for Audible’s original series Bedtime Stories for Cynics with Nick Offerman, where he has written for David Spade, Tommy Chong, Nick Thune, and more. Evan Vest and David Eubanks open. Jessica Grant hosts. $15