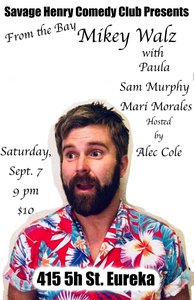 Mikey Walz Is a stand-up comic hailing from the Bay Area. In October of 2018, Mikey was diagnosed with a rare type of bone cancer. On halloween day, in order to save his life, Mikey underwent the amputation of his left leg. After begrudgingly taking his first break from doing comedy in 8 years, he’s now back on stage and better than ever. Mikey has performed at some of the top shows and clubs across the country and been selected to participate in SF Sketch Fest, Chico Comedy Fest, Santa Cruz Comedy Fest, and The Savage Henry Comedy Fest. Like a comedic pirate, Mikey is storming every stage in the Bay Area and beyond. Paula and Mari Morales and Sam Murphy open Alec Cole hosts. $10