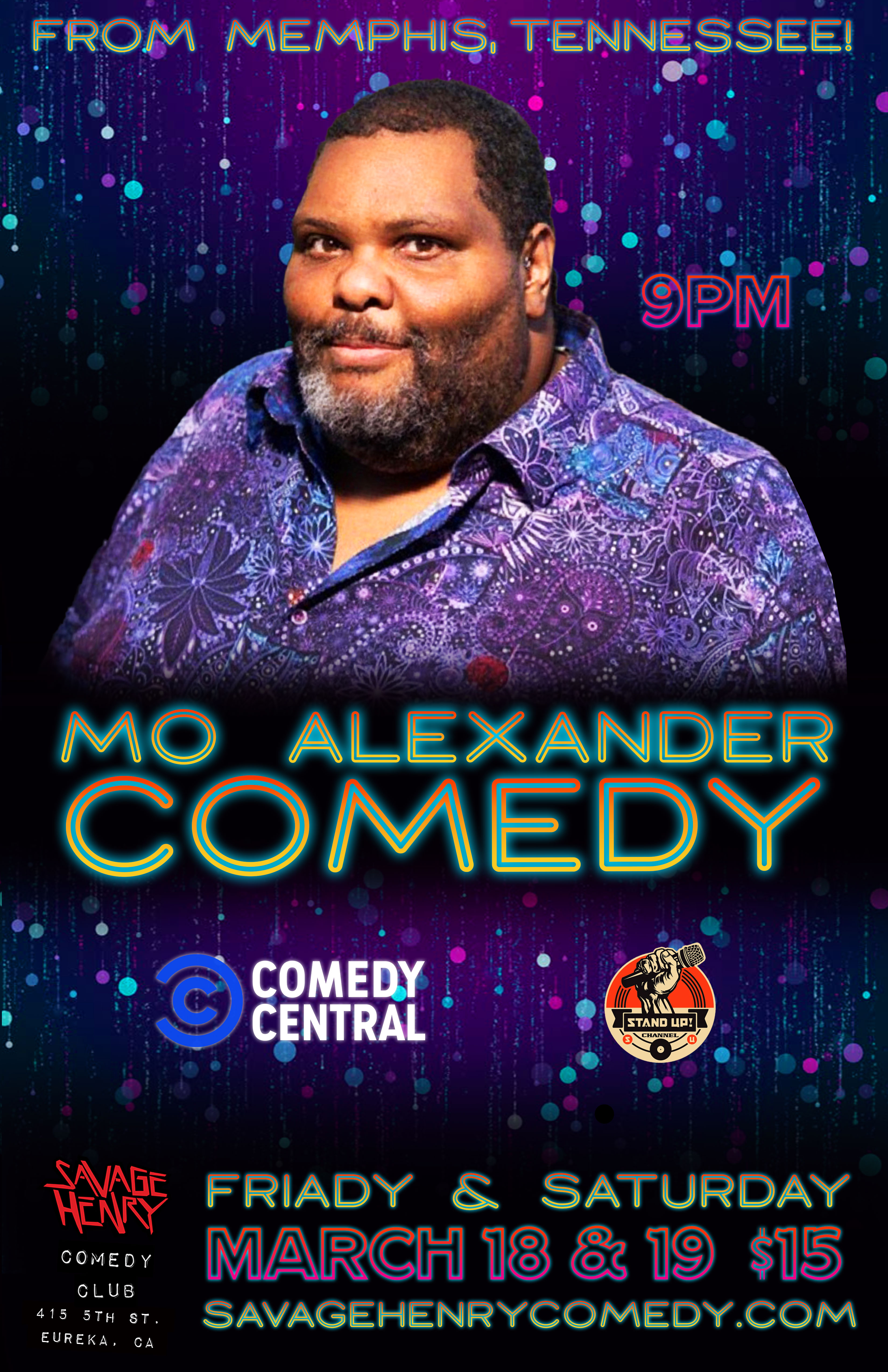 When Mo Alexander hits the stage, it’s clear that you’re in the hands of a man who knows what he’s doing. With comedy influences such as Bill Hicks, Paul Mooney, and Richard Pryor, Mo combines intelligence and debauchery into a product that is just as funny as it is important. With an ability to access both the smartest and the stupidest parts of your brain, there’s a reason this comedy phenom has been headlining comedy clubs nationwide for over 20 years. Mo began his professional full-time comedy career in July 1996 featuring in clubs throughout the United States and by 1999 he was headlining. In 1998 Mo made an appearance in Bret Michael’s film, A Letter from Death Row. After impressing Keenan Ivory Wayans with a good natured roast, Mo was invited to be the opening act on tour with Keenan in 1999. In 2003 he was given his own Las Vegas show, “The Mo Funny Show” at the Casino Royale. In the past few years Mo has been on several syndicated radio shows in major markets, such as Bob & Tom (Indianapolis), and Mancow (Chicago). He made his way through the ranks to become a semi-finalist in both the San Francisco Comedy Competition (2012) and the Seattle Comedy Competition (2013) and has been a headliner at a number of comedy festivals such as: Asheville Comedy Fest (2015), Altercation Comedy Festival (2016 & 2018), Hopkins Comedy Festival (2017), Memphis Comedy Festival (2017), North Carolina Comedy Festival (2018). On December 15, 2017 Mo’s first national stand-up appearance aired on Comedy Central where he appeared in Kevin Hart’s “Hart of the City: Memphis” Mo has released four CD’s: Evolution (2006), Nappy Headed Hoes and Other FCC Infractions (2008), Just in Case the Mayans are Right….(2016) (featured on the iTunes new and notable charts front page for 5 months), and Got Clots (2016). Got Clots is a hilarious look at life, chronicling 77 days of hospitalization, as can only be told from inside the comedic mind of Mo Alexander and was released exactly one year from the time of his first death and resurrection which occurred on April 5, 2015 (Easter Sunday). Mo is excited to announce his signing with record label Stand Up! Records owned by Grammy Award Winner Dan Schlissel. In Septemeber of 2019, Mo made history by becoming the first comedian ever to record an album at world famous Sun Studio in Memphis, TN. The album is as yet unnamed and it’s release is to be announced soon. To say that Mo is funny is like saying that Michelangelo was a good painter. Taking all of life’s absurdities and creating a night of hysterical laughter is why Mo Alexander is one of this industries greats. Mo takes a lifetime of experience and insight and transforms them into some of the most ingenious laugh riots you will ever experience in your life. Not for the faint of heart or mind, intelligent and hard-hitting are two terms that best describe what everyone that has ever been to a Mo Alexander Show will experience. Nothing compares to the energy of a room when Mo is through with it. Watching Mo Alexander is a night of hilarity and mischief that one won’t soon forget. He usually tries to leave you with the underlying message,”I’m trying to save the world, one comedy show at a time.” After a night with Mo you realize that not only were you entertained, you’re changed. You have a mission: “Slap the stupid!”