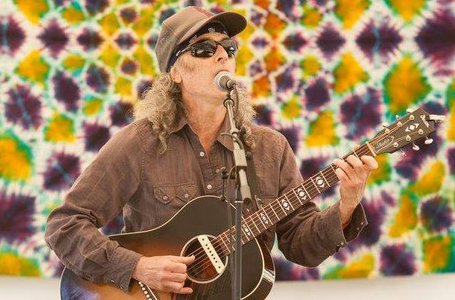 Celebrating the release of a new collection of songs: “The Jaybird Said.”

Returning to Humboldt after a long hiatus, singer-songwriter Mokai plays the songs from his new album in the new home of good friends from the Strawberry Music Festival, Tom and Shelley.

NOTE: This is a private invite-only event and reservations are required for attendance. RSVP here on Facebook or by email at
TDKMSellers@gmail.com to receive the address in Eureka, CA.

Get ready for an eclectic evening of Mokai’s signature fingerstyle guitar and inspired songwriting. Rhythmic folk-blues and moving ballads.

A $10-$20 suggested donation goes 100% to the artist, collected at the door (cash appreciated, Paypal or Venmo also accepted). Kids under 16 free.

Light refreshments will be provided. Bringing snacks and libations to share or enjoy yourself is highly encouraged.

Mokai was raised from a feral youth by the San Francisco songwriter community. Acoustic Guitar magazine called Mokai “…one of the more original players on the Bay Area acoustic music circuit”.

Mokai’s sound can best be compared to other current Americana players who have a singer/songwriter side, such as Kelly Joe Phelps and David Jacob Strain. His original guitar style echoes his life-long love affair with the playing of pre-war era bluesmen. His moods can be reminiscent of classic songwriters like John Prine and Townes Van Zandt, with that something raw in the vocals and lyrics.

“Very 21st century lyrics to a fingerpicking style that originated from the Piedmont style of blues guitar picking. Reminds me a lot of Dave Van Ronk, of the great folk scare of the 60s.”
Kevin Vance, Across the Great Divide – KPFA

See video of Mokai live, hear his latest music and join the fan club at https://www.MokaiMusic.com