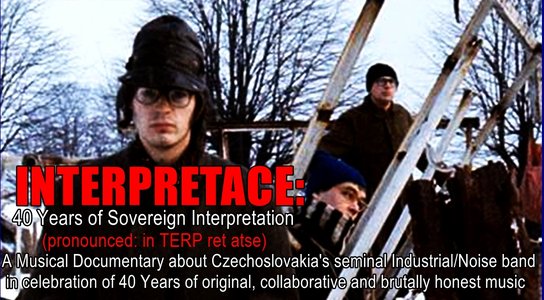 “Back in the early ’80s, when the Czech Republic was still part of Czechoslovakia, and Czechoslovakia was still behind the Iron Curtain, a cassette of Interpretace’s music got smuggled out of Czechoslovakia, and found itself in the hands of Rudolfo Protti in Northern Italy, who then released it on his record label, Old Europa Cafe. This release introduced Western Europe to the emerging underground Industrial/Noise scene in Socialist Czechoslovakia. Years later, an American collector bought a trunk full of Industrial/Noise cassettes and eventually posted some of his favorites to Discogs, a website for record collectors. In 2009, Richard Charvat, one of the founding members of Interpretace, and an avid record collector himself, saw the listing on Discogs. Until that moment, no one in the band knew that their music had been released.

Interpretace began making music in 1979, and this year they celebrate 40 years of highly original, radically collaborative and uncompromisingly honest music. It has been my pleasure to get to know them, to play music with them, and to honor their long career with this short documentary.” - John Hardin