Phantom of the Opera / Nosferatu - live score by The Invincible Czars 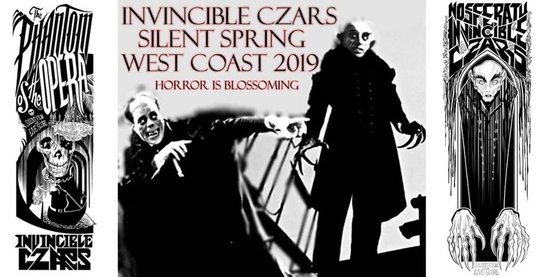 TWO SILENT FILM CLASSICS WITH A HAUNTING LIVE SCORE! The Invincible Czars return to the Eureka Theater with a chilling & thrilling double feature. Austin’s Invincible Czars have made their mark by creating exceptionally original music: songs and instrumental pieces that are like four-to-five minute mini-symphonies chock full of memorable melodies, meticulous arrangements, dynamics, and humor. Their music fuses riff rock, classical/symphonic music, heavy metal, loungey grooves, odd meters, klezmer, country shuffles, punk rock and circusy polka. They draw from influences as disparate as Slint and Igor Stravinsky, Van Halen and Louis Armstrong, and The Melvins and Ween. THE PHANTOM OF THE OPERA In this silent horror classic, aspiring young opera singer Christine Daaé discovers that she has a mysterious admirer intent on helping her become a lead performer. This enigmatic masked presence is Erik, also known as the Phantom, a horribly disfigured recluse who lives underneath the Paris Opera House. When the Phantom takes Christine prisoner and demands her devotion and affection, her suitor, Vicomte Raoul de Chagny, sets out to rescue her. NOSFERATU Originally released in 1922 as “Nosferatu, A Symphony of Horror”, this chilling and eerie adaptation of Bram Stoker’s “Dracula” is a silent masterpiece of terror which to this day is a striking and frightening portrayal of the legend. As the world’s first vampire movie, it is regarded as the first important horror film—but it was almost erased from the history books when the estate of Bram Stoker sued the filmmakers for copyright infringement and most of the prints of the movie were destroyed. Several survived, and this performance will feature the most completely restored version that exists. Doors open at 6:15, Phantom showtime at 7:00, Nosferatu showtime at 9:00. Tickets are $20 for the double feature ($10 each movie), available at the door.