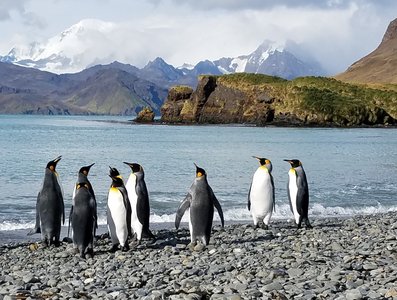 Redwood Region Audubon Society invites you to join Andrea Tuttle for an armchair trip to South Georgia Island aboard the National Geographic Explorer. South Georgia and the South Sandwich Islands are a British overseas territory in the southern Atlantic Ocean. The waters of this sub-Antarctic island teem with krill, nourishing a food chain abounding with penguins, fur seals, and pelagic birds. Andrea traveled to South Georgia and the Falklands in March, 2018, on a quest to visit both north and south polar regions. From nesting Black-browed and Wandering Albatrosses and Giant Petrels to Rockhopper, King, Gentoo, and Magellanic penguins, you’ll get a taste of this diverse, wild, and beautiful island plus a stop in the stark sheep country of the Falklands. Ecologists have raced to eradicate reindeer that were introduced by Norwegian whalers in the 1920’s, before retreating glaciers enable populations to spread. Victory has also been declared on the eradication of 200 million rats, allowing ground-nesting birds to recover. Fur seal populations hunted to near extinction, now number in the hundreds of thousands. Refreshments will be available at 7 p.m. and the program starts at 7:30 p.m. Bring a mug for shade-grown coffee and come fragrance-free.