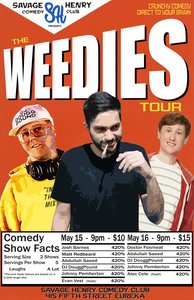 Abdullah Saeed, host for Bong Appétit and Vice Does America on Viceland, as well as the Webby Award-winning documentary Mad Honey. Saeed is a writer and actor on the HBO series High Maintenance. Johnny Pemberton is a comedian, actor, writer, mildly knowledgeable gardener, reggae enthusiast, and friend to both insects and mammals.Johnny is the voice of ‘Peanut’ on the Disney XD show “PICKLE AND PEANUT”. He can be seen in the films “21 JUMP STREET” “22 JUMP STREET” “NEIGHBORS 2” “THE WATCH” “ANT MAN” “BAND OF ROBBERS” “THE 4th” “ACTION POINT” “TONE DEAF” and Armando Ianucci’s Oscar nominated film “IN THE LOOP”. He plays ‘Bo’ on NBC’s “Superstore”, ‘Max’ on season 4 of FXX’s “You’re the Worst”, and ‘Alangulon’ on the FOX series “Son of Zorn”. Johnny is a nationally touring comedian and host of the vanguard podcast “LIVE to TAPE” on Starburns Audio. He was born and raised in Rochester Minnesota. He lives in Los Angeles. DJ Doiggpound from Tim and Eric Show Good Job, 2 Wet Crew and The Poundcast. Opening is Matt Redbeard and Josh Barnes. Hosted by Evan Vest. $10