« Fiber-Optic Scare? Not So Fast…

Documenting the Damage—The 101 Slide and Beyond » 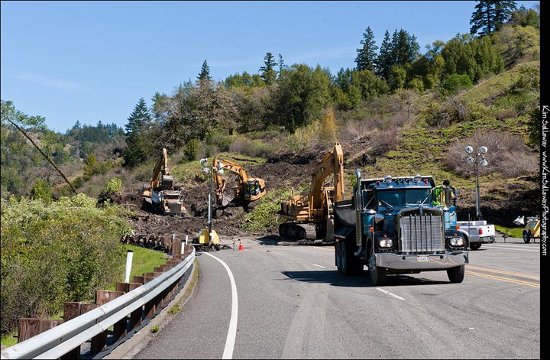 Still pretty much all-slide, all the time.

– The T-S has a long roundup of yesterday’s news here, in advance of the update from Caltrans scheduled for 10 a.m. this morning. As of yesterday, the agency was still optimistic about getting one lane open by the weekend, the T-S reports. The CHP was still skeptical. The county estimates that local roads have already suffered $588,000 in damage from people detouring around 101.

KIEM talks to the people working the slide from the ground, and has some shots of their big machinery traversing the massive pile of dirt. Crews are working 24-7.

The T-S runs an entertaining profile of a truck driver who witnessed the slide, and who thinks he may have been caught underneath if he hadn’t turned around to pick up a forgotten item shortly after setting out on his route.

Last night’s KMUD News leads with interviews with Supervisor Cliff Clendenen and Diana Totten, who toured the area by airplane yesterday. They report on what they saw from the air: The 101 slide, the small county roads that people were using to detour and another big landslide on private property east of Benbow. Audio below.

– In other news: The T-S reports on how efforts to restore the Salt River estuary and thereby save farmland from annual flooding may be hampered by a new lawsuit brought be the Farm Bureau. The action has enraged the people who have been working for a decade on restoration efforts, and could scuttle funding for the project whether it is successful or not.

This story actually broke this week in the Internet-scorning Ferndale Enterprise, and it’s well worth seeking out a copy of that paper. Editor Caroline Titus spoke with KHUM’s Larry Trask about the story on Wednesday, though. Audio below:

– KMUD reports on a new study that places the national medical marijuana retail market at $1.7 billion. (Minute marker 22:20 on the first audio player in this post.)