Fiber-Optic Scare? Not So Fast…

Fortuna Internet firm Precision Intermedia just sent a note out to its customers warning of an imminent outage of the fiber-optic line that is Humboldt’s sole connection to the digital universe. The company writes:

We have just become aware that ATT is planning to replace a section of the fiber cable that is buried underneath yesterdays major landslide on HWY 101 near Dean Creek. The outage of connectivity is expected to last approximately one day and expected to occur during the next few days.

Everyone’s been worried about this and half-expecting it, so this kind of warning is instantly believable.

However, after talking with the people at Precision we’ve been able trace the info back to its source. Precision heard about it from a local teacher, who heard about it from the Humboldt County Office of Education. An e-mail circulated amongst the education community today that said, in part, this:

As you may know, a major slide occurred yesterday on Hwy 101 near Dean Creek (Redway). AT&T is working diligently to ensure that our fiber connection to the south stays functioning.  However, the slide has further buried the cable and at some point they will have to patch in another fiber cable. I anticipate the loss of fiber connectivity within the next few days, once the slide stabalizes. My assumption is this will take the majority of the day once the work begins. We will update you when more is known about when the loss of connectivity might occur.

The e-mail asks interested parties to contact HCOE technology staffer Gabor Sziladi for more information. But Sziladi just told the Outpost that this e-mail was nothing more than a precaution; in fact, he has not spoken to anyone at AT&T nor does he have contact info for anyone who might actually know what’s going on.

Indeed, it’s been a bear to get any information at all on what effect the slide might have on the fiber-optic line. Everyone assumes that the slide has covered the line, and it’s a fair assumption. It runs along 101 for most of its length. Sziladi, who knows better than most of us, says that he believes the line is currently underneath the slide.

So: Probably. Still, the only map we’ve been able to find with any detail at all is the following, taken from Tina Nerat’s 2002 study of communications infrastructure in the county. 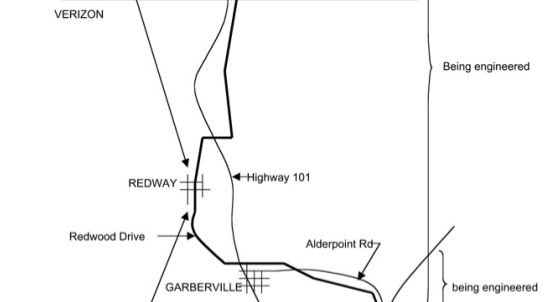 That’s on page 10 of this PDF, if you’re interested.

This map would seem to indicate that the fiber crosses 101 somewhere before the slide, around Dean Creek, and travels from there up a different canyon before returning to the highway. But then again, this map is from 2002 or earlier, before the line was actually built. It represents the plans for the line, not the line itself.

Bottom line: We don’t know whether the line was buried under the slide or not. But we’re pretty sure that no planned outages are imminent.

Please — anyone — you got better info?