Why I Love Humboldt » 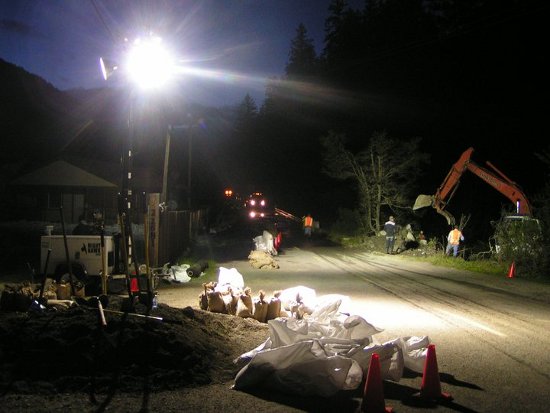 — The Del Norte County Sheriff’s Office has boated in supplies to residents of Requa stranded by mudslide, the T-S reports. Meanwhile, in the southeast, county public works crews are still battling the slide that has diverted Dobbyn Creek near Alderpoint. The errant stream is threatening Alderpoint Road and a nearby home.

The KMUD news, naturally, is all over Dobbyn Creek:

— Eureka Unified School District Superintendent Greg Hauk tells KIEM that Jefferson School will likely be sold today . The West Side neighborhood group that wants a community center there has scraped together a bit, but there are at least four other parties who have expressed interest.

— Speaking of KIEM, Ferndale Enterprise Editor Caroline Titus is apparently preparing to open up some whoop-ass on the station over its coverage of the E. coli-ridden Fernbridge Cafe:

So stay tuned for that! Meanwhile, the KIEM news team follows up on its previous work in a new report that didn’t make the jump to the Interwebz so cleanly.

— Grow houses galore! The Eureka Police Department just pulled 710 plants, 220 pounds and four pit bulls out of a blown-up H Street joint; Hillsdale Street neighbors have settled their lawsuit with the landlord of another. (The landlord, we remind you, is a scholar at the libertarian Cato Institute think tank.)

— Something weird is going on with the new construction at St. Joseph Hospital, but this refashioned press release doesn’t tell us what.