« Homeless in Humboldt—It's More than a Problem; It's a Girl 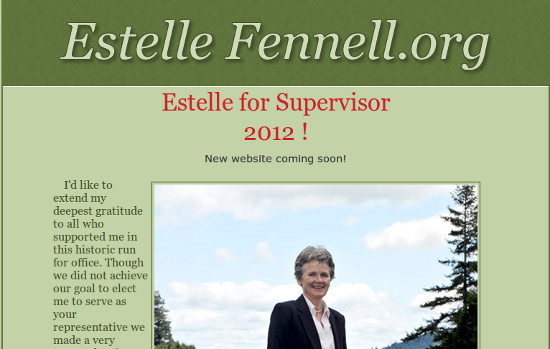 Now playing at estellefennell.org — a red-letter announcement that the former KMUD news director and 2008 Second District Supervisorial candidate is, in fact, going to seek a rematch in 2012. Now we see whether Fennell’s recent tenure as the executive director of the Humboldt Coalition for Property Rights gives her the juice she needs with the all-important Fortuna constituency. (h/t Dennis Huber, @eurobureau.)

UPDATE, 11:39 a.m.: The announcement that was at the top of Fennell’s Web site this morning — see screenshot above — has been removed.

From the Napa Valley Register and the Pee-Dee, news that Assm. Michael Allen (D-Santa Rosa) is hightailing it out of town rather than go head-to-head with our man Wes “The Chezz” Chesbro — showing, once again, that even an assistant majority leader is no match for the unstoppable juggernaut that is the Chezz.

But if there’s less competition for the 2012 Assembly seat, mightn’t there be much more for the 2012 State Senate seat? Dick Spotswood of the Marin Independent-Journal writes that it’s “no secret” down his way that Evans is considering scampering away from Sacto to assume a seat on the Sonoma County Board of Supervisors.