The Voltron of Beers 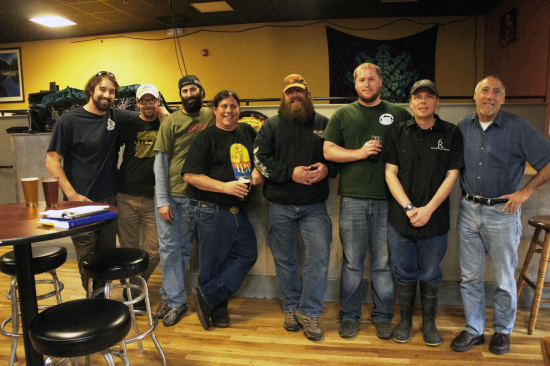 Supergroups have a checkered past: For every Gnarls Barkley or Traveling Wilburys you have a Velvet Revolver or Chickenfoot.

Conversely, any child of the ’80s will exalt Voltron as a beacon for those seeking to unite disparate elements into a single entity greater than the sum of its parts.

In recognition of American Craft Beer Week, all five Humboldt breweries formed their own boozy supergroup. On May 14th, they unveil the fruits of their collaboration: Saison du Humboldt.

[POP QUIZ: Name all five breweries. Find the answer below the jump.]

This limited-edition ale will be available while it lasts at each participating brewery, as well as Blondie’s Food and Drink, Humbrews, and The Local. If all goes well, the breweries want to repeat this sudsy summit annually.

Each brewmaster has a proven record as both mad scientist and party catalyst. Can their combined effort create the ultimate beer? Will it be “Van Hagar” or Voltron?

“We were talking about how fun it would be to get all the breweries together and brew a great beer in honor of American Craft Beer Week, which runs May 14-20. I put the idea out to the rest of the beer gang in Humboldt and everyone quickly agreed,” said Ripley.

Next, all the brewers met to discuss the style of beer to make and formulate a recipe. They decided on Saison Du Humboldt, based on the Saison style of a sometimes slightly sour, refreshing, and somewhat strong summer ale (5 to 8 percent abv).

“As far as we know, this is the first time such a brew has been collaborated on by five separate breweries. The brew day was quite an event and meeting of the minds among five brewers, each doing their part. I hope it brings the same joy and merriment to all as it did for all of us,” said Carlos Sanchez, brewmaster of Six Rivers Brewery.

The brewing group has fondly dubbed themselves the Six Mad Lost Red Eels to incorporate the name of each brewery and hopes to make the collaboration an annual event.

“I personally would look forward to making a Humboldt Collaboration brew an annual event for American Craft Beer Week, with each edition being a different style every year. This project was great fun and very inspirational to all who participated. We have an amazingly brilliant collection of brewing minds in our area, and it has been a true pleasure to work together with everyone involved,” said Schatz.

Saison Du Humboldt, a one-time edition, limited production run, will be on draught at Humbrews starting Monday, May 14, for the kickoff of American Craft Beer Week which started in 2006 as a national celebration of America’s small and independent craft brewers and their impact on American culture. Saison Du Humboldt will also be available while it lasts at each participating brewery, Blondie’s Food and Drink in Arcata and The Local in Eureka.